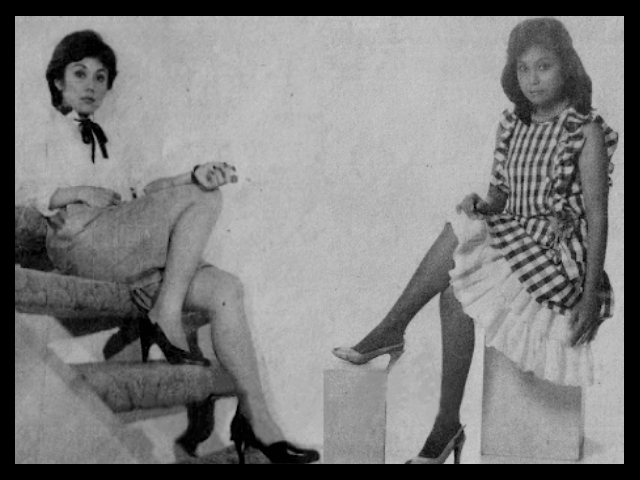 Many have probably observed that not only the superstars' image are larger than life but also their problems. With their rise to the top, they get to command astronomical fees but their problems also become bigger and pile up on them. Two superstars who have been much talked about as a result of their fights to keep their pretty heads about the troubled waters of their domestic and financial affairs are Nora Aunor and Vilma Santos. Both Guy and Vi conducted a rivalry for the movie queen crown in what seemed like only yesterday - when their days were more care-free and everything came up roses and the world was at their feet. Now the world's pressing down on them. They have had to contend with sleepless nights and keeping the BIR and creditors from their doors after seeing their marriages go phfft and their careers wax hot and cold. Strange how these two superstars who have captivated the movie audiences as only Rosa del Rosario and Carmen Rosales had done in their heyday could have such parallel ups and downs. Accordign to the latest reports, both Nora and Vilma appeared to have surmounted most of their financial woes or keep them to a manageable level. But on the domestic side, both of them seem to have been faring with little success. Vi is still poles apart from Edu, her hypersensitive husband, but has not ruled out a reconciliation. She has spurned overtures from many roving romeos, emphasizing that she's a one-man woman, not a one-man-at-a-time woman. In the case of Guy, she has to face the reality of a permanent estrangement with Boyet de Leon, especially now with reports of Sandy Andolong's expecting a visit with the stork soon.

To top it all, Nora has not been spared from vicious rumors lately. One has to do with her and Christopher de Leon's marriage being allegedly null and void since the priest who conducted their most unusual wedding rites by the shoreline supposedly wasn't authorized to do so. In an interview with Inday Badiday, who was a witness to the wedding rites, Guy belied the scuttlebutt. She pointed out that the priest had solemnized other weddings besides theirs. She said that it was her ninang, Kitchie Benedicto, who got the priest. "Mataas ang pagtinging ko kay Ate Kitchie," Guy said. "Siya'y isang tao na maasahang tama ang gagawin. Ang masasabi ko sa mga taong nagsasabi niyan, tigilan na nila ako. Huwag nang alang-alang sa akin kundi sa aking anak. Baka makaapekto sa bata." There wasn't any trace of bitterness in her voice of face when Guy said all these. She was a picture of a woman composed and able to take her dose of medicine. Vi exhibit the same equanimity. They have both apparently learned to take good with the bad, how to handle success and dissabpointments as well. "Mature na ako ngayon," Guy told Inday Badiday. "Remember, noong araw, kung may problema ako, tinatawagan ko lahat ng kaibigan ko. Nagkukuwentuhan kami sa bahay at pag naubusan ng kuwento, lumalabas kami. Ngayon, kung may problema ako, nagiisa ako sa bahay." The other rumor has to do with her adopted daughter, Lotlot. The child's real mother allegedly wanted to claim her back afterl all these years. Our ed, Mar D'Guzman Cruz, was privy to the mother's signing of Lotlot's adoption papers at the city jail fo Olongapo about 10 years ago.

The child was about 10 months old at the time and every inched looked undernourixhed. Lotlot, now in the pink of health, shows signs of growing up into a pretty young lady. A fourth graded at St. Paul's College, she's been raised in a convivial atmosphere and believing she's nobody's child but Nora's. Now comes this disturbing rumor. Nora is most concerned about it because of its possible traumatc effect on Lotlot's tender mind. Our ed quoted Nora as reassuring Lotlot. "You and Ian are both my children. The only difference is that Ian came directly from me while you are God's gift to me. You were given to me by the Sto. Nino." These unsettling rumors notwithstanding, Nora can look forward to a brighter tomorrow. She expects that her doing the prestigious Himala for the ECP will work wonder for her flagging career. She has learned her lesson about accepting every offer that came her way. At this critical stage of her career, she knows she'll have to be more discriminating in her choice of offers and make less but more prestigious pictures that will advance her stature as an actress. Vilma voices the same sentiments in this regard. Nora not only sold her Valencia residence but moved out of Corinthian Gardens to a newly constructed house in a subdivision at Tandang Sora, a stone's throw away from Broadcast City. The pictures of her house, which appeared in Movie Flash, show it is spacious and well appointed in the interior (there's a giant screen and a Betamax machine in one nook). Two cars are on the driveway - a Datsun 1800 and a Mercedes Benz 230. The new location may be less exclusivistic than her last place of abode but it's in keeping with her decision to live a less flambouyant lifestyle out of necessity. The BIR agreed to Guy's settling her tax obligations on a compromise basis.

The same considerations held true in Vi's tax cases. With no more threats of levies of restraint or destraint on their properties and bankbooks, both of them can now think more positively about a lot of things in their minds. Both Nora and Vilma admitted to having a cavalier attitude on their fortunes as a result of their heady successes as superstars. Both of them thought there was no end to the good days until the heady bubble of their successes burst and they discovered they were back to square one. Vi admitted to being in the red to teh tune of seven million pesos. "How could I have incurred all that debt?" she asked herself askance. Nora must have the same bewildered expression. They made all those millions and had housefuls fo hangerson to cheer them up. Now, there's only loneliness to keep them company and an uncertain future to look forward to. But one thing in their favor, they're still young and their careers can easily take an upswing if they put their hearts and minds to it. Vi has been doing exactly this. She set to put her financial record in order. She sold her Tahanan Village house and never mind if she took a loss since she needed the cash. With the success of Sinasamba Kita and producers flocking to her door with offers of two or three pictures contracts, Vi was assured of bailing herself out of her financial straits. But she took care to commit herself cautiously and reserving the right to choose her roles. Now hot again, she was able to make the last payment on her tax arrears. Vi's now left with two problems to rackle, according to reports. One is a P700,000 debt with a financing company that was due last Oct 10.

The other is her plush Magallanes residence. She wanted to sell it because she has to pay interest on the loan she got to build it and to cut down on her expenses. The house has become impractical to maintain now that her sisters have moved to Papa Santos' house. And with Edu having flown the coop, there only her, son Lucky and Papa Santos (temporarily keeping them company) at her Magallanes abode. The other rooms in the large house are now empty. Mama Santos left for the States reportedly to work as a credit card analyst and help care for daughter Winnie's brood. Like Guy, Vi's looking for smaller place to live in. Vi's venture into movie production proved disatrous. She burned her fingers with her very first attempt, Pagputi ng Uwak, Pagitim ng Tagak. Guy has had more luck as well as disppointment in her venture as producer. She went to her NV Productions offices which have been lond idled to clean up the premises preparatory to going back into production with a vengeance. Guy's also mulling putting up her own recording company. As a recording star, Guy made fortune for Buddy de Vera. Vilma also made William Leary happy with her records. Now that she's got her bearing back, Vi's determined not to repeat past mistakes. She reportedly got her ninong, Atty. Espiridion Laxa, as legal adviser in her business affairs. There have been offers reportedly made to Vi to team up with Romeo Vasquez and Alona Alegre in a triangle opus. But someone close to Tagalog Ilang-Ilang Productions said Vi's going to the States this December to attend to some matters and she'll do a picture there with Romeo Vasquez.

There have been offers also to Nora reportedly to ream up with Tirso Cruz III and Christopher de Leon in a similar triangle-minded flick. These offers are gimmicky, considering that the castings hit close to their homebases. But don't they affirm the parallel turn of events in their love lives? They say when you're up there, no other place to go but down. Guy has been in showbusiness for 16 years and her TV show, Superstar, has been running for 15 years. Vi has been in showbusiness even longer, having started out as a child star. She's also got her own TV show again, V.I.P. Both Guy and Vi have shown great resilliency for two petite and frail-looking beauties. But looks can be deceiving. They are pretty tough inside. They've been exposed to the wayward winds of fortune and tempered in the process like well-seasoned bamboo. They will probably survive long after the young pretenders riding the current love bandwagon have spent themselves out like brief, bright shooting stars. - Danny Villanueva, Movie Flash Magazine, November 18, 1982 (READ MORE)

NOTE: As of 2012, Vi is now a certified politician and happily married to Senator Ralph Recto while Guy remained happily single. Now both in their retirement years, both remained actively in demand in local entertainment scenes. 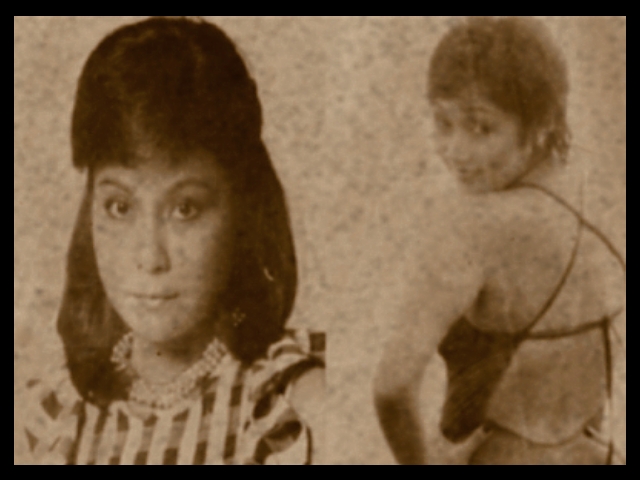 Email ThisBlogThis!Share to TwitterShare to FacebookShare to Pinterest
Labels: ARTICLES, Nora Aunor, The Ups and Downs in the Careers and Private Lives of Nora and Vilma
Newer Post Older Post Home