News Clippings Collection is Back! 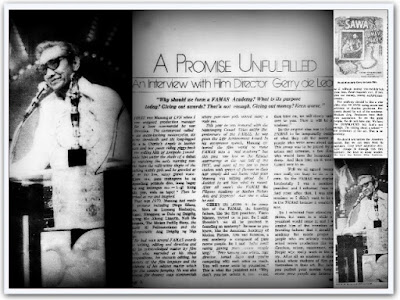 Gerry's Plan - "...Now what I'd like to happen is to have directors unite and talk about how we can improve our art. Ofcourse, they will say: Why should I share my secrets with Gerry? But that should not be the attitude. I'm not saying this because I'm old, no. I'm passing the buck to the young directors. Talking about achievements, I was given the Life Achievement Award by the FAMAS. But I would like to talk about what I did not achieve. And I pass this thing which I did not achieve to you, to Brocka, to Ishmael Bernal, to Eddie Romero, to the young generation, to - yong si - gumawa ng Vilma Santos... what's his name now?...(PDC: Celso AD. Castillo.)...Yan! Me tipo, me drive. They can do it if they'll only try, and given the chance. Pero kami what we spent for money in those days were peanuts, and when you spend peanuts you get - peanuts! Now, budgets are getting bigger. Nevertheless, we still need an Academy because we are slowly being eaten up by foreigners. Ah, you don't realize 0 look at your morning papers. Look who pays for the biggest advertisements. Not us. If they are not being paid by Americans maybe they're being paid by the Chinese, or the Japanese. I'd like the movie people to unite in order to perfect themselves. Like these actors..." - Pio de Castro III, WHO Magazine, June 24, 1978, re-posted by James DR, Pelikula ATBP, 08 August 2018 (READ MORE) 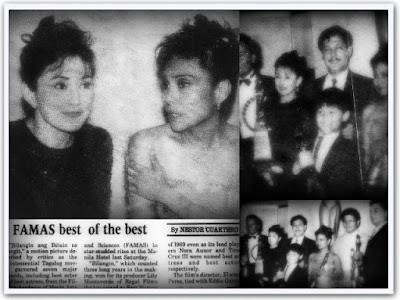 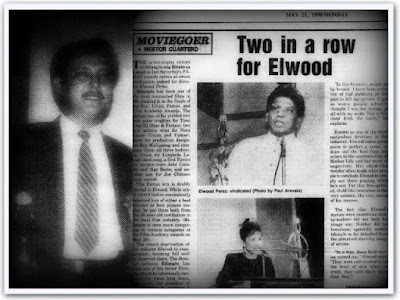 Most Deserving - "...His reputarion as a commercial director eclipsed whatever in the mid-70s towards serious art. To this day, critics single out his productions of Divorce: Filipino Style and Isang Gabi, Tatlong Babae as landmark films for and about women. His excursions into melodrama, actually his turf, are no less exciting. Nakawin Natin Ang Bawat Sandali; Masarap, Masakit Ang Umibig; Till We Meet Again; Pakawalan Mo Ako; Ibulong Mo Sa Diyos. The last two won for Vilma Santos two Famas trophies to complete her magic five qualifying her to the Hall of Fame. More than any other person's winning, Perez is most visibly elated by the victory of Tirso Cruz III in Bilangin. "I thought he was more deserving. People have this notion that Tirso is not exactly a good actor but his performance in Bilangin bertrays all that. It's his old image as a matineer idol that works against him still. I'm glad Pip is over and done with it now and that people are actually convinced how great an actor he is..." - Nestor Cuartero, Tempo, 21 May 1990, re-posted by James DR, Pelikula ATBP (READ MORE) 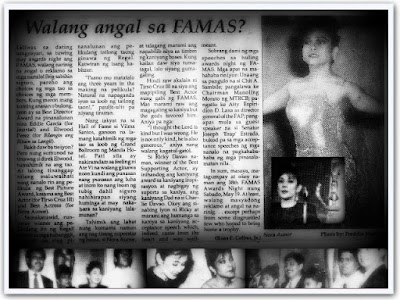 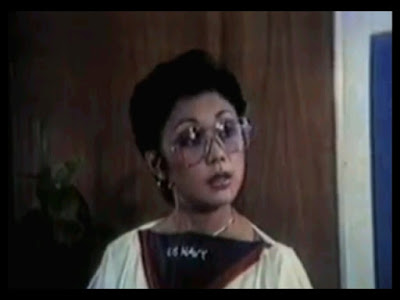 Free Love - "...Fate would have it that in the space of three days I watched Vilma Santos as June (in Kampus, 1978), the firm believer of ‘free love’ caught between the attentions of two men, and Angel Locsin as the fierce Ces, setting the terms of an affair with a man she decidedly resists. Four decades apart, these representations of strong, independent women caught within obstacles premised on love remain appealing to viewers. The conflicts faced by June and Ces are hinged on unconventional ideas about the conduct of heterosexual relationships. These women characters unequivocally distance themselves from the bind of traditional relationships and the expectations that burden it; June with sophisticated musing and Ces with stoic distance...While Vilma Santos’s June ponders her preference for ‘free love’ intelligently, weighs her dilemmas with pensive introspection, faces her hurdles with sarcasm and humour; Angel Locsin’s Ces is denied this chance, wallows instead in denial which became infuriatingly tiresome. This is not to blame Locsin’s abilities as an actor (adept at she is in portraying conflicted characters, torn in situations not of their making) but on the film’s failure to fully flesh out its characters. The film failed to grasp a deeper vein of feeling. Thus, when we find Ces and Macky in strained conversations grappling with their predicaments as individuals and lovers, why do they seem unconvincing, their loneliness and dilemmas so affected?" - Deborah Jermyn, 2011, posted by YCC (READ MORE) 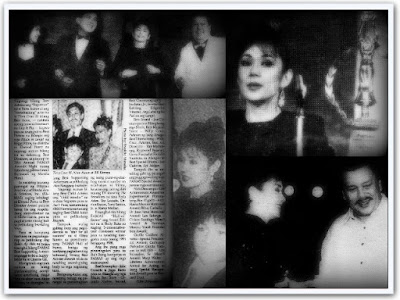 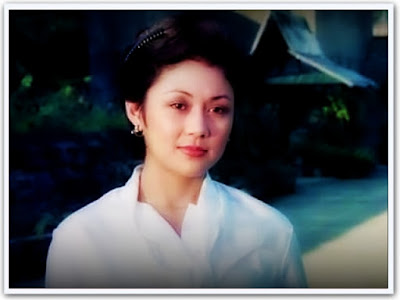 Silent Confrontation - "...The movie brings together fierce cinema rivals Aunor and Vilma Santos as well as Aunor’s then-husband, Christopher de Leon. Skydiving enthusiast Rex (De Leon) and horticulturist Tere (Aunor) are in a stable relationship until the arrival of Sandra (Santos), a liberal-minded artist. Rex embarks on an affair with her, then becomes overcome with guilt when Tere discovers the relationship. Ikaw ay Akin is best known for the “silent” confrontation scene between Aunor and Santos, where neither speak a single line and communicate by just staring at each other..." - Coconuts Manila, 27 July 2018 (READ MORE) 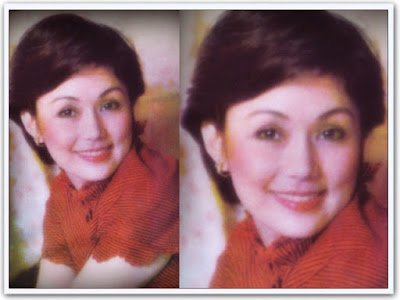 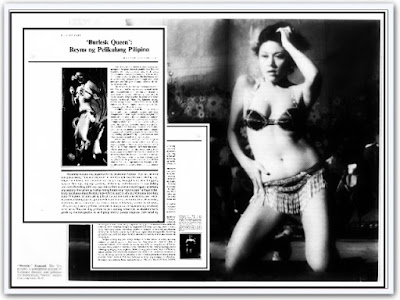 Burlesk Queen, Reyna ng Pelikulang Pilipino - Celso Ad. Castillo's Burlesk Queen surpasses past attempts to integrate cinematic qualities in a film and Castillo's own previous experiments, which critics found bombastic and purely commercial. Like no other film by Castillo or other directors, Burlesk Queen, with its synchronized techniques and the significance of its message successfully gives substance to the trendy subject of sex-for-sale. The movie tells of a teen-age burlesque dancer in the '50s, who suffers deprivation, personal crises, alienation, and in the end, an abortion as she dances her grand finale for survival. With such a simple plot, the movie laudably brings together the talents of director Castillo, screenwriter Mauro Gia Samonte, musical director George Canseco, actors Vilma Santos, Rollie Quizon and Roldan Aquino, cinematographer Ben Lobo, and editor Abelardo Hulleza. Castillo's creativity is seen in the use of radio darma and music, meaningful gestures, and visual metaphors or allusions to give added psychological and emotional dimensions to dramatic situations. Lucid exposition and delineation of the conflict are carried out through particular techniques like ensemble acting to reveal the individual characters' needs, emphasis on visual details rather than talky dialogues to drive home a point, and active camera movements (cuts) to suggest the passage of time in the burlesque dancer's career. The tragic ending is prepared for by a logical presentation of what happens eventually to all the characters. Artistic form and meaningful content merge to convey the film's statement on society's view of low-class entertainment. Moralist censure burlesque dancing, but as the stage impressario in Burlesk Queen asks, what form of entertainment then should be given to ordinary people who cannot afford to watch shows which are exclusively for the rich who dictate the community's morals? The irony lies in the fact that while audiences are entertained, the performers' lives are none of their concern. For these cheap entertainers who dare to live outside society's moreal laws, there is only condemnation. - Jun Cruz Reyes, The URIAN Anthology 1970-79, reported by Simon Santos, Video48 Blogspot, 27 August 2018 (READ MORE) 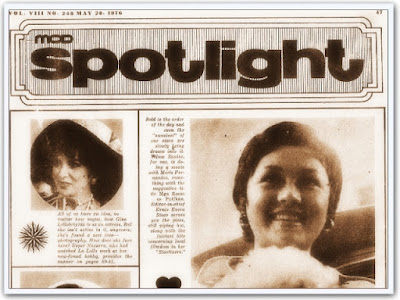 Mod Spotlight - "Bold is the order of the day and even the "sweetest"of our stars are slowly being drawn into it. Vilma Santos, for one, is doing a movie with Merle Fernandez, something with the suggestive title Mga Rosas sa Putikan. Editor-in-chief Ernie Evora Sioco serves you the peice, still piping hot, along with the juiciest bits concerning local filmdom in her "Starliners." - Mod Magazine, Vol VIII No. 248 May 20 1976 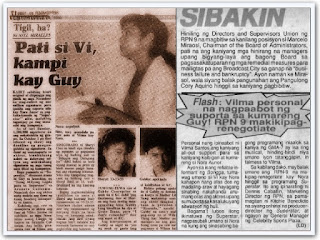