News Clippings Collection Is Back! 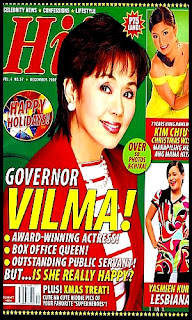 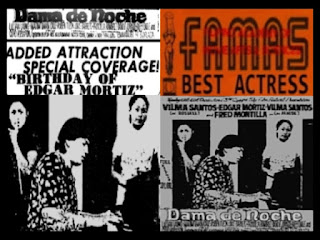 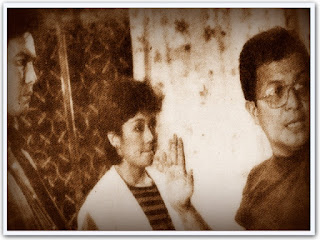 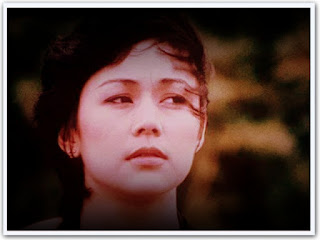 Would it be Good Karma? - One of the most misunderstood occult concepts. The nearest equivalent in European thought is contained in the idea of fate, though the oriental term indicates that fate is not a haphazard sequence of events of experiences, but is dependent on actions of previous lives or spiritual conditions. The idea is that a spirit undertakes to live in an earthy body for a given period of time, usually in order to learn something which cannot be learned in a disembodied state, and has to accept rewards and punishments for good and bad deeds committed in previous incarnations. In order that understanding may grow, any evil committed against another person will have to experienced by the perpetrator. The working out of Karma is not done consiously by ordinary people. The real reasons for the majority of peopleès actions and relationships may be understood only when the nature of their Karma is grasped -which is virtually impossible to understand or judge another person when seen in the context of one material lifetime only. Vilma Santos fits the role to a T. For the past years that she has suffered a string of misfortunes and setbacks in real and reel life, she has honed herself as promise, a common objective: to give the viewing pubic what it wants - entertainment with a capital E. For Danny Zialcita, aside from having a good screenplay, good direction and brilliant actors and actresses, the movie should have artistic values. Karma promises to be a very good vehicle not only for Zialcita but also for Vilma Santos and the rest of the cast. Will this movie be a good Karma for director Danny Zialcita, Vilma Santos and the rest of the cast? It'll be a different kind of feeling you'll get after viewing it. - Bong de Leon, Jingle Extra Hot Magazine, 02 November 1981, Reposted at: Pelikula Atbp (READ MORE) 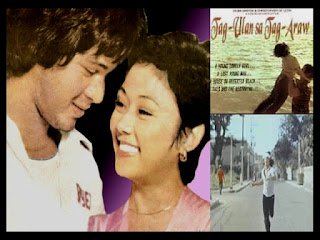 My First Ever Short Story - "...In 1963, I was a civil engineering student at the Mapua Institute of Technology, supporting myself through college with employment at the travel agency cited above, as a manager/janitor. I say manager because I was, indeed, designated manager by the agency owner, another Mr. Tan, but I continued to be the stay-in messenger/janitor of that whole ground floor unit of a building in Binondo. A venerable Chinese (a Towa or Siuwa, can’t recall now) of senior age, the partner of Mr. Tan in the import/trading business, would engage me in storytelling during lunchbreaks. Probably he had been observing how at night I would pound the typewriter to churn out short story manuscripts, which I never tired of writing despite the consistent rejections I got from Weekly Graphic literary editor Vicente Rivera, Jr. (In 1965, anyway, Vic stamped okay my first ever short story to be published, “Forests of the Heart,” adapted in 1975 into the screenplay titled, by the film director Celso Ad Castillo, “Tag-Ulan Sa Tag-Araw,” a smash hit that starred Vilma Santos and Christopher de Leon.) During one such lunchbreak, the old man told me this tale of a handsome macho Chinese scrap dealer who was enamored of a lovely Spanish widow. The two lived as lovers and begot seven sons who the father named according to Chinese numerology, thus: It-sun, for the first son; Di-sun, for the second son; Sam-sun, for the third; Si-sun, for the fourth; Go-sun, for the fifth; Lac-sun, for the sixth; and Sit-sun, for the seventh. In Fookien Chinese, there is a word “tua,” meaning “big”. Used in this context of the seven sons, “tua” could refer to the big one, who else but the seventh who could be dubbed Tua-sun. Over time, the “u” in the “sun” had been changed to “o,” making the names read thus: Itson, Dison, Samson, Sison, Goson, Lacson, and Sitson. And what are these names but of those among the elites of Philippine society..." - Mauro Gia Samonte, The Manila Times, 21 October 2017 (READ MORE) 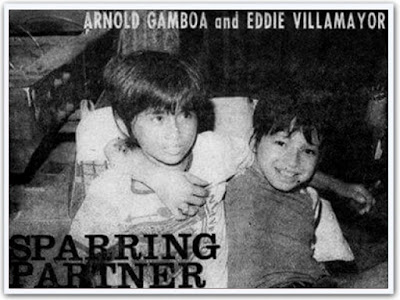 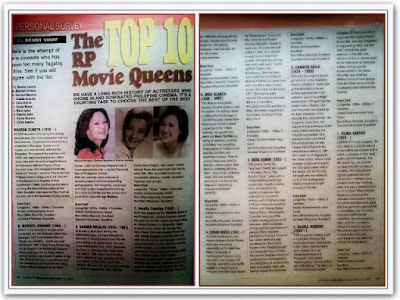 A Personal Survey - The Top 10 RP Movie Queens - "...Here is the attempt of one cineaste who has seen too many Tagalog films. See if you will agree with the list...1. Vilma Santos (1953-) Longevity is her weapon. To her credit is a mighty record of box-office successes and a stellar collection of film and public service awards. The 80s made her not only the number one film actress of the land. She became the highest-paid actress and constantly in-demand as a product endorser. Hosting-wise, she was phenomenon on TV's Vilma! Vilma Santos-Recto is a picture of the ultimate movie queen. She is the prime example of an artist who has gone through several re-inventions. Ate Vi's most important traits are her versatility, he willingness to learn, and her courage to always try something new. Her sincere appreciation of followers and fans also contributed to her status as the Star for All Seasons. Score Card: Longevity: 1960s-2000s, 5 decades; Artistic Achievements: Excellent; Box-office Records: Excellent..." - Rendt Viray, INsider The Entertainment Weekly, 12 December 2007 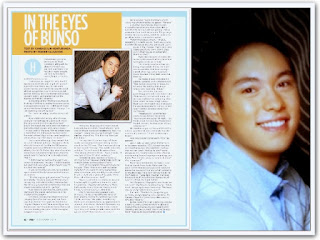 Regular Filipino "Darna" Mom - "...Just a normal teenage boy, except that he is not - at least not to us, the public. He is, after all, the son of the Star for All Seasons. He grew up in a world where his mom was already the Ate Vi. To this day, when he comes home from school, there are times when he would look for his mom and jokingly shout: "Ate Vi!" "I didn't see her before she wasn't well-known to everyone," he says. "I didn't need to get used to it, you know what I mean? Kasi, for me, that was normal." It was normal that one day he stumbled upon videos of the Darna series that starred his mother. "The feeling you get, you know," he says animatedly. "You see Wonder Woman, but I can say my mom did it better! Hahaha! Kasi ako, I'm a big komiks fan and the fact that she played a superhero, that's...ang galing!" Ryan lists the Darna series, particularly Darna and the Giants, as his favorite in his mother's filmography. Not many can say that their moms had "playing Darna"in their resume, but Ryan says that, for the most part, his mother is a "regular Filipino mom." Whenever Ryan had friends over, Ate Vi would welcome them and insist on feeding everyone. "Kahit busog ka, bibigyan ka pa rin." At home, Ryan says his mom would typically be in a shirt, "short shorts,"and one of those workout headbands. Not in a duster? "She's too young for that!" Ryan replies, chuckling. "I'm kidding. Not just her thing." He says Ate Vi, on her days off from work, can usually be found sitting on the couch in the TV are. "She does everything in that couch!" he says. She works out, eats, watches TV, and even falls asleeep there. "She sleeps with the TV on," Ryan reveals. "If you turn off the TV, she'll wake up." Overall, he says, his mom is "a mix of strict and cool." He even prefers talking to her when it comes to the subject of girls. Both of his parents "give good advice," he says. "Pero I like mom's advice better. Hahaha! If you want to know something about a woman, why would you ask a man? Might as well ask a woman! So girls -Mom. Dad -all of the serious stuff..." - Candice Lim-Venturanza, Yes! Magazine October 2015 (READ MORE) 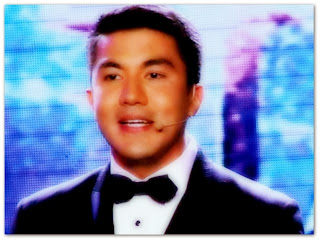 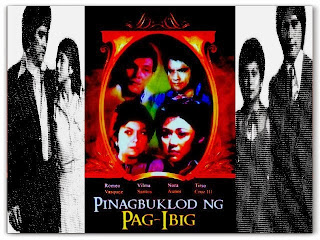 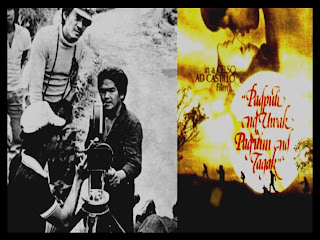 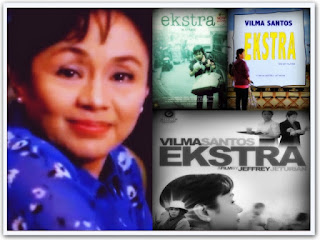 Unheralded Heroes - "...I watched Ekstra (aka The Bit Player) during its star-studded gala premiere. Sure enough, there was boisterous laughter all over the fully-packed Main Theater at CCP. But, how come I barely find anything funny with the film? After much rumination, I recalled producer Joji Alonso’s request to people who dislike the film to be fair. She usually is upbeat and confident with her Cinemalaya films, most of which are award winners and audience favorites. So when Alonso made the unusual plea, I thought it was a red flag. On the last day of Cinemalaya 2013, I reluctantly gave the box-office champ Ekstra a second chance. I’m glad I did because it was a much better film experience for me. I’d zoned out on the clunky jokes and focused on the story. Boy, the film’s satiric barbs really, really stings. I laud the film's courageous, no-holds-barred depiction of ruthlessness in the telenovela industry. Ekstra does a decent job of showing the hardships faced by an extra like Loida Malabanan (Vilma Santos). The life of a bit player is not a bed of roses. Movie and television extras are subjected to various types of abuse. They belong to the lowest stratum in the hostile showbiz jungle. Loida and her colleagues were shooed away by various groups while in search of a place to rest and put their things. The film's scriptwriters, Jeturian, Zig Dulay, and Antoinette Jadaone, won an award for their poignant take on those unheralded heroes of the film and TV industry. Jadaone, however, has written and directed a better, funnier film on a lowly bit player. Feeling sorry for Loida at the end of Ekstra?...Bit players yearn for a place on the screen, big or small. Loida dreams of breaking out from being a mere part of a crowd..." - Nel Costales, 1505 Film Avenue, 17 August 2013 (READ MORE)