Maria Rosa Vilma Tuazon Santos-Recto (born Maria Rosa Vilma Tuazon Santos November 3, 1953 in Bamban, Tarlac), commonly known as Vilma Santos-Recto or Ate Vi is a Filipino actress and box office queen for almost four decades. One of the original Philippine movie queens, she rose up to become the versatile actress that has been given the fitting title of “Star for All Seasons” because of her capacity to adapt to the changing mores and values of the Filipino woman, giving a face to their plight and struggles, albeit in success both critically and box-office wise in some of Philippine cinema’s classics such as Trudis Liit (1963), Lipad, Darna, Lipad (1973), Burlesk Queen (1977), Relasyon (1982), Sister Stella L. (1984), Alyas Baby Tsina (1984), Pahiram ng Isang Umaga (1989), Dahil Mahal Kita: The Dolzura Cortez Story (1993), Anak (2000) and Dekada ’70 (2002). She is currently the Honourable Congresswoman, Representative of Lipa City, Batangas, Philippines (2012)(Wikipedia).
For More Informations, Visit: Vilma Santos-Recto's Official Web-site 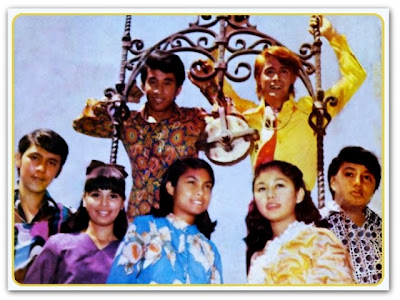 1:00 PM Summer: 7 Stars in Special Sunday Session - Summertime. And Sunday too. So it started like a summer day. Casual yet exciting. Carefree and promising. With a lot of expectations for the moment ahead. So it was with having seven young stars around, TSS Stars '70: Vilma Santos, Tirso Cruz III, Nora Aunor, Eddie Peregrina, Edgar Mortiz, Ed Finlan, and Hilda Koronel (in the order of their arrivals). There they were, prompt in their youth, bubbly in their youth, unassuming in their confident in their success amid an ancient backdrop, the UST Pharmacy Gardens. When age and youth meet in such a dramatic setting, there is bound to be communication, reaction, combustion. Effects! And what is a more fitting place to spend an early summer afternoon than staid, old UST with young, alive radiant stars for company and that peculiarly romantic, nostalgic summer air. And when the yound stars started posing, smiling, obliging and when the cameras went on clicking, popping shuttering and when scribes began talking, laughing directing, the summer day with its flair, laziness and air became an impromptu ball for all concerned. One fun-filled episode of a lifetime. A slice of real life to be kept in one's heart for the memory. Now, you may wonder why we have seven successful young star this issue when TSS launched only six last January?

Blame the whole mess on Ed Finlan. Blame it on his personality, his promise, his name that just can't be ignored. Blame it all on the zooming career of Edward Walter Valdes Finlan. So the special seven. On this photo-session hangs a story. A story of hope coupled with a little confusion from that time Kuya Bert planned to put out another issue as a follow-up. Timely enough. After all TSS started the whole pakulo. The session itself was postponed three times - just to be assured of the attendance of all - including Nora Aunor who missed it that first round. Every time it was moved to another date, we lost face some wasy, especially to Pip's Mommy Elma with whom we played ulianin by reminding her each time we met. That first time, it was called off. Edgar and Vilma were in Baguio City for shooting. The next date, everybody can't make it with TV programs and last time shooting to do. So it was finalized on Sunday, March 15 at 1:00 piyem. It would have been Fort Santiago as rendezvous but Sunday is Sunday in the forth with the usual Sunday crowd being there. Why not a school campus since graduation and demos were in the air? And the stars came beyond modest expectation, ahead of schedule. Vilma Santos came with her Mommy Mila and Papa Amado. Tirso Cruz III came with uncle Joey and a group of friends while Nora entered the scene with a few fans.

A Mustang (aba, bago!) ushered in Eddie Peregrina with his man Friday. Edgar Mortiz with Dad Celso adn Mom Lucy with fans Angge, Mario Cay, Luz Orellano and Araceli Paraiso. Ed Finlan arrived with his usual confident self. And Hilda came with Mila Parawan to complete the magnificence. At little confusion resulted. It began with a comedy of errors. With Vilma, Pip, Nora and Eddie, there was only scribe Ched Gozales to entertain them and out they were in the Pharmacy Gardens before one one o'clock only to be told later taht the assembly point was the UST Arch along España. Under the heat of the summer sun, the group went to the Arch only to be told that the locale would actually be the Gardens. Since after all, a big number of movie fans and onlookers had already started to form at the UST entrance. The merry excited entourage made its way to the Gardens once again. Ed Finlan with his shocking humor and equally color-shocking attire of yellow shirt with loud-striped pants under the golden sun was summer in motion. Vilma on the other hand had a ball ribbing Eddie Peregrina for being "mayabang kasi Edong ka na ngayon." Edgar Mortiz was extra solicitous and ultra-PR conscious that time. Hilda did her thing - more of a girl, rather than woman with self-conscious laughter and sweet and pretty flair. Pip was surprisingly in his calm self and ruffled impeccable long sleeve shirt.

Eddie Peregrina was in paisley with that typical Peregrina grin. Nora, quiet and lady-like with a few smile here an a wave of hand there, was in a blue-orchid print. Hilda was the only one in pantsuit, a purple hablon, and she stood out really. Ditto with Haydee's make-up and hair color on Ed. Oh what they had to forego just to make it to the appointment on time. Edgar and Vilma came from ABS where they had My Love For You at noon. But before that, Edgar came from Sta. Teresita Church where he acted as baptism sponsor. Hilda and Ed came from the Haydee set and they were expected back there in two. Pip was in a rush too, from ABS and then to the bingo social of his fans at their compound and the photo session as far as he was concerned. Eddie Peregrina had an appointment at 2:30 and it was Nora it seems who took her own sweet time. The Gardens yielded an old well, a gazebo-like concrete structure for photographic effects and possibilities. At half-past one, the poses were planned, the shots called for and everyone appearing swell putting their best faces forward, looking deserving of the TSS choice. An old well, very symbolic really, for the first shot and when that first one popped, the sessions began. And for a good forty minutes, the cameras aimed to catch for eternity the faces, the stances, the poses with the smile and bravura of that early Sunday afternoon. After all, that was what the session called for! And after all, what are photos for but for catching, freezing, preserving what is today for tomorrow? 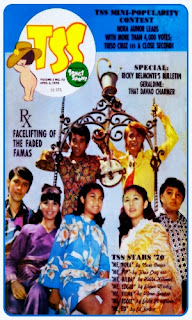 The atmosphere was kept livelieer, dramatic with some curiosity-seekign fans and a number of scribes and last-minute guests. There was Jusyo C. Justo popping out of nowhere with his OBBB, OBWB, CTS and BAB, Doddie Alvarez, Donnie Ramirez, Mercy Lejarde, Marina Reyes and Ched made their presence felt with summery get-up. Late arrivals were Rene Tiosejo for a look-see and Oskar Salazar with a brand new-opera glasses (but Romy Mallari and Roldan de Villa weren't around). Zeny Peralta of Roper's was there for someone's moral support. Two mothers managed to snae some attention - Lucy Mortiz in pink pantsuit and the latest Christian Dior hairdo and Mommy Milagros Tuazon Santos in blue pantsuit, with their respective male halves of course. At twenty past two, Ernie Alfonso had used u his one and half rolls of color film while Bert Verlidas had two black rolls. There was Fred Garces of Roper's jiving in. The session, the main part of it, was now over. After all the camera clicks, the 1-2-3 shots, the photographers' directions and the frozen poses were done and the thank-you's and see-you were said, still one is left with the thought that so far, so good. TSS Stars '70 are still unspoiled byt success and we hope as one that they all stay that way. And there is something more left in the memory, something better felt than described. For how can such feeling, or any feeling at all for that matter, be caught and pinned down as words in print? I am attempting to that now but I know that it would be the pictures of that special session which will speak a thousand words, a thousand feelings, a thousand hopes. Pictures, eloquent and feeling-filled, with a history of their own! - Billy R. Balbastro, TSS Komiks, 1970 (READ MORE)