Maybe The Philippines’ Best Film Actress of All Time 3/3 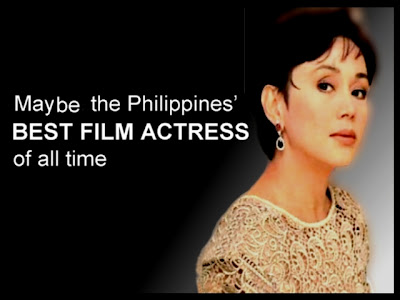 By The Numbers – Vilma Santos VS Nora Aunor

Conclusion: Is there really anything that Vilma Santos cannot do, except sing (yet she has gold records and a hot-selling CD of her greatest hits), and to act on stage (too busy to say commit to oh so many tempting offers)? Fifty-three year old Vilma Santos’ outstanding record of achievements and awards in her dual career as actress and politician can easily land her in Guinness’ Book of Records. No other Philippine celebrity, male or female, dead or alive, can ever match this petite actress cum mayor’s formidable stature as the Philippines’ most awarded actress and politician. A high school graduate, a non-singer and only five feet tall, and an inexperienced mayor in her first of three successful terms, she practically is a David among the Goliaths such as Nora Aunor, FPJ (SLN), President GMA, Regine Velasquez, Sharon Cuneta, among others. As an actress, she played second fiddle to the CCP Centennial honoree and three-time International Best Actress Nora Aunor, an Urian favorite who would easily beat her in acting jousts via her signature soulful eye acting. On TV, her then struggling VIP show would avoid competing with Nora’s Superstar to avoid being murdered in the ratings war, the barometer for popularity and advertisers’ nods. It is a different story though in the box-office arena where Vilma was crowned the champion many times over. In the late 70’s, just when people thought she was down and out with her so-so acting and TV careers and losing to her rival in awards nights (remember the 1978 MMFF best performer award?), her messy love life, and her in the red movie company VS Films, Vilma Santos, by some divine intervention, regrouped, took a breather and a crash course in counseling 101 with the industry experts. After soul-searching, making peace with God, listening to the advice of trusted friends, talent inventory, doing research/self- study, experimenting with movie roles and choosing her projects wisely (i.e. astute career management according to Nestor Torre), the New Vilma Santos was born. The rest is now history.

Thanks to her Talent, Tenacity and Professionalism, and her many rivals’ complacency and misjudgments in life, Vilma Santos ’streaked’ past them, not easily though but through sheer True Grit. She earned her wings. When the dust settles, Vilma Santos: Is probably the Philippines’ Best Film Actress. She is also the most awarded actress ever, 70 trophies in all and counting, the latest feat being her Best Single Performance Award from PMPC Star TV awards for her committed, focused, insightful and versatile performance (again, Nestor Torre’s remarks, not mine) in MMK’s Regalo. Her astounding range, equally at home in drama and comedy, earned her the most prestigious awards in the business: U.P. Gawad Plaridel, U.P. Diwata Award, a record 8 Urian best actress trophies, 6 from Star awards, two International Best Actress trophies, National Artist Award nominee, and the People’s Choice Awards (a record 14 movie fan-based magazine best actress awards), proofs that Vilma is both the critics and the paying moviegoers’ choice. Is one of the two highest paid actresses and top commercial product endorsers in the Philippines, along with best friend and soon costar in a Star Cinema project, MegaStar Sharon Cuneta, who, along with millions of Pinoys, including the Youth, look up to Ate Vi as a Positive and Inspiring Role Model. Is the Movie, TV and Stage Producers’ Choice based on published articles from various tabloids/journals. She has to turn down juicy offers due to her commitments as Lipa city Mayor.

Is the most awarded TV personality in the Musical-variety show genre, having won awards for Vilma!, from PMPC Star, CMMA, Dove Awards, among others. (Source: vilmasantos websites) Is the Philippines’ most successful and awarded Mayor ever, with such honors as Honoris Causa, PhD in Humanities, Outstanding Mayor, Unlad Pilipinas Award, Mga Munting Ngiti Award, among others,and even put Lipa city in the world map for winning Internationally for Mga Munting Ngiti project.(source: vilmasantos websites) Is the Longest Reigning Movie and Box-office Queen based on published/website data. Is a winner in the domestic front for helping her children Luis and Ryan excel in what they do, a real bonanza of priceless rewards for balancing parenthood and career, an almost impossible task which Vilma, Mother, accomplished, with aplomb, a Herculean task indeed, serving as Inspiration to all working mothers around the world. A consummate actress, an impassioned and hardworking mayor, a devoted wife and a dutiful mother, and a loyal and sincere friend to her fan base, Vilma Santos is indeed the Woman for All Seasons and Reasons.

What’s next for her? It’s all up to her. It is really between her and her Creator. We, her fans can only wish her the best, and respect and support her decision all the way, whatever that might be, whether it is politics or showbiz. As Mario Bautista sums up her many accomplishments: Incomparable. After all, either way, Vilma Santos is a Winner. The best is yet to come! - Mar Garces, Maybe The Philippines’ Best Film Actress of All Time, Special Issue Magazine, 2006