Plot Description: King Kayam’s search for another wife brought him the escapee, Princess Gracia. She doesn’t want to be wed to a man, she doesn’t love so she left her kingdom and ended up in King Kayam’s kingdom. They met and fell in love.

Film Achievement: Vilma and Joseph’s first film together as an adult actors and third overall. Their first film was Batang Iwahig, where Vilma was just a child star. The other film was Dugo at Pag-ibig sa Kapirasong Lupa where they did not share any screeen time. 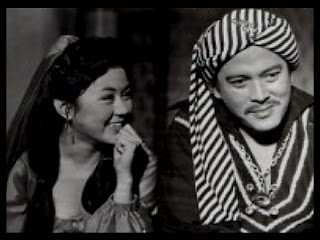 Film Reviews: The film started promising with funny scenes of Joseph Estrada facing his people seeking his advice or help. One was when a man presented his new product, a flying magic carpet but when the carpet didnt fly, Estrada suggested a lighter weight rider. Then veteran actress and much younger, Mary Walter in a cameo role, brought her just bought magic lamp. She complained to the king that the seller fooled her to buy the lamp and wanted a refund. She then caress the lamp and the gennie came out but instead of the expected giant gennie, a midget dwarf came out. Then from this moment the film went downhill. A singing bird, a transexual Ike Lozada being auctioned, Rod Navarro’s over the top villain antics, all failed to sustained our attention. The weak storyline did not help. Patterned with the Hollywood film, King Kayam & I’s only saving grace was the acting of its lead stars. Joseph Estrada’s precense was commanding and convincing as the playboy king and Vilma’s charming innocense despite the sexy dance number at the end complimented Joseph’s macho image. The two did three films, although they didn’t shared a single scene in Dugo at Pagibig sa Kapirasong Lupa, King Kayam was their only film together as mature actors. Their first outing was Batang Iwahig, when Vi was just a childstar and Joseph was in his early years as a bankable action star. Produced by Experidion Laxa of Tagalog Ilang-Ilang Production, the film was just a mild hit, probably the main reason why there was no follow-up project for the two. Two reasons why the film failed was probably the cheap set decorations and the weak story/screenplay of Nestor U Torre, Jr. The song lyrics of Levi Celerio can’t salvaged the mostly canned music of Resti Umali either. This was despite the splendid musical number in the kitchen (when Vilma protested to the cooks that she was a princess and should be treated like one). Die-hard Vilmanians would probably considered Vilma’s dance number at the very end as the hightlight of the film. - RV, (READ MORE)