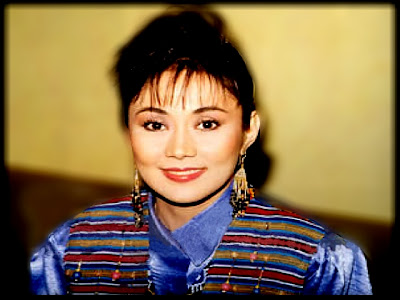 In the fickle and uncertain world of showbusiness, there is one name that has remained consistently on top fro the past two decades: Vilma Santos. Hers is an altogether exceptional case as her movie career has brought Santos both popular and critical acclaim. Even more amazing is her star continues to shine more brightly.

In 1963, a chubby, gangling nine-year-old girl was to do a film with Lolita Rodriguez and Luis Gonzales, in Anak ng Iyong Ina. An unexpected turn of events, however, found her auditioning for the lead part of Trudis Liit instead. The movie mogul, Dr. Jose Perez, of Sampaguita Pictures, who was then conducting the audition noticed the girl and thereupon commanded her to act. When she did, the producer was pleased with his find, wasting no time to cast her in the title role. That girl went on to become the first best child actress of the Filipino Academy of Movie Arts and Sciences (FAMAS).

Having hurdled her fist test, the child Santos found herself being cast in the part of the young daughter of the film’s leading adult characters, as in the controversial Iginuhit ng Tadhana, where she portrayed the Marcoses’ eldest daughter, Imee.  At the onset of the popular teenage love teams, who dominated the late sixties and the early seventies, Santos found a loyal screen partner in Edgar Mortiz with whom she would coo and cuddle her way through the fans’ hearts and into the box office. The pair found a worthy match in the Nora Aunor-Tirso Cruz III romantic tandem, which could enviably pave the way for a long-time Santos-Aunor rivalry.

In 1977, Santos found herself gambling with her sweet and virginal image built up by studio machinery by doing the highly controversial Burlesk Queen. With maverick director Celso Ad Castillo at the helm, she essayed the role of a teen-age burlesque dancer in the fifties, who, driven by economic and personal depression, danced her way to the film’s grand finale – an abortion scene. That gamble certainly paid off, for soon after the film’s release, Santos felt that people became increasingly interested in her and more particularly in what she could do, not as a star but as an actress worth her salt, her fans, on the other hand, could only concur in her decision to become a serious thespian.

Her later movies would prove her right. In ht. In Rubia Servios (1978), directed by the top-caliber Lino Brocka, she made people take notice of her acting mettle as she effectively portrayed the harrowing experience of a rape victim. Then, she did Pagputi ng Uwak, Pag-itim ng Tagak (1978), under her own VS film outfit, in the role of a tragic heroine caught in the midst of seething social unrest. Then came the films with director Ishmael Bernal: Ikaw ay Akin (1978), Relasyon (1982) and Broken Marriage (1983). The last two films earned for Santos two consecutive best actress awards from the critics’ body. This was followed by yet another award-winning performance Sister Stella L. (1984) where she did justice to the part of crusading nun who eventually involves herself with the workers’ cause.

Graduating into mature and radically complex roles – away from the mold of which she was typecast – Santos adamantly refused to do the same predictable roles, believing that she would be better off with the then emerging roles of liberated woman and independent minded wife, as the temper of the times so dictated. Her continued popularity in these seemingly novel roles proved that the transition was smooth, and the fans were well-prepared for it.  “If I am still here,” Santos says, “it must be because I am not afraid to take risks in my profession. I also owe it partly to careful planning and getting the right projects. And when I decide to take a chance, and it turns out well, then that would be great. If not, I just have to stand up again.”

Today, the actress is seemingly content with the way her career – and life – has turned out. She continues to get good meaty roles as evidenced by recent pictures such as Baby Tsina, Tagos ng Dugo, Ibulong Mo Sa Diyos, and Pahiram ng Isang Umaga, all of which have earned her both nominations and awards from various award-giving bodies. She continues to strike a happy balance by doing films that would please the critics and her audience of ardent admirers as well.  Now the mother of eight-year old Lucky, her son by estranged actor-husband Edu Manzano, Santos has found newer challenges to keep her weekly musical show, Vilma, which has been accorded recognition by both Star Awards and the Catholic Mass Media Awards. On top of these, she produces occasional drama specials on television, directed by name directors and scriptwriters.  “My career has brought me fame, fortune, and most important of all, professional fulfillment. From the mistakes I have committed in the past, I have emerged a much stronger person,” she says. If she were to live life all over again, Vilma Santos would have no qualms about becoming a movie star all over again.
Source: Written by Justino M. Dormiendo and Photographed by Calixto N. Rodriguez Filipino Heritage