The Vindication of Celso Ad Castillo 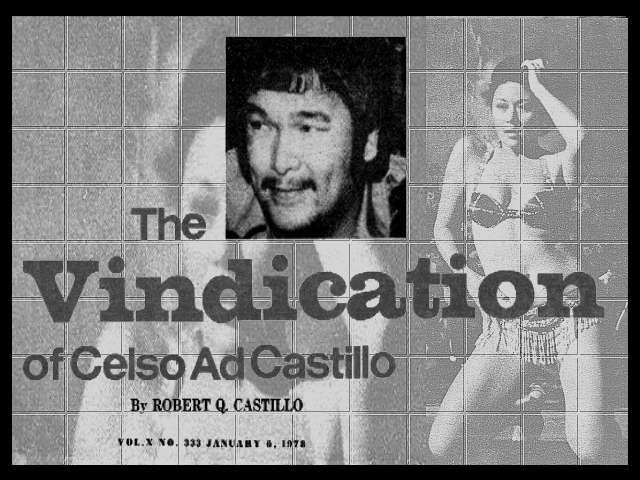 'Twas two weeks before Christmas - and Metro Manila Filmfest time. With the exception of Armida Siguion Reyna's Mga Bilangong Birhen, all the contending films had either been premiered or previewed, various places yet: at Magnatech, Greenhills, San Miguel Auditorium, Phil-Am Laboratories, Ocean Cinema. Some of the films, such as Sugapa and Banta ng Kahapon had been shown twice, thrice already. That early one film had very surprisingly become heavy favorite - Celso Ad Castillo's Burlesk Queen. Its inclusion in the Filmfest was in itself a big surprise since only very few knew it was in the running. Everyone who saw the film had noticed at least one good point, sending many people's careers soaring. Even before the film had its regular run it was already being rumored that Vilma Santos had upped her price from P100,000 to thrice that much. Can anyone beat that? What about Celso Ad Castillo, Burlesk's creator? How was he taking all the praises, the excitement his film had generated? We found him drinking and smoking in his office, which looked like it did a year ago except for some new pictures on the walls, blow-up stills of Vilma doing a striptease. Celso was taking everything so nonchalantly, so unlike him. "If I were my usual self, I would be most mayabang now," he very casually admitted. "I'm taking all of it silently and that takes a lot of effort." He laughed, long and hard. He was with his wife and kids in the States when he decided to do the film. It was some sort of reenactment of a part of Celso's childhood, particularly the days he spent watching burlesque dancers at the Inday Theater. "This is where I lost my virginity," he chuckled, making us doubt whether he was serious or not. "Burlest is very special to me," Celso expressed. "For the first time in my life since I did Nympha I was being faithful to myself."

As long as he could, he stayed away from the finished product, seeing it only in its entirety during the premiere and only because he had to. That is because he wants to be a "virgin" every time he starts a film, unencumbered by the glories and/or defects of his past films. "Burlesk is the work of an auteur," he eulogized. "I practically did everything in the movie. It was from me the plot came, I did half of the script, I personally supervised the editing, recording, even the mixing and the dubbing." What's more, he even sang the theme song, a George Canseco composition; he even played a bit part. Except for the financing, he encountered no problem in doing the movie. The censors frowned on the title at first, considering it too risque for popular consumption, but Celso explained his purpose, settling for no compromises, requesting that the title be judged from the torality of the picture. Burlesk didn't only retain its title - it was even passed by the Filmfest screening committee without any cuts. Celso hadn't had a single headche with his crew, his stars. This has been so because he personally chose the men he was to work with, from the leads, the extras, down to the lowliest member of the crew. Expectedly, Celso was raving about Vilma Santos. "I'm in love with Vilma," he confessed. "No, no, I don't mean I want to go to bed with her, " he qualified. "I simply care for her. I have to care for my star to be able to do beautiful things with her for the movie. "Vilma has arrived," he continued. "Burlesk is her signature picture. From now on, she's Number One. The way she did the climatic striptease act is tantamount to doing seven extremely difficult scenes." It took Celso exactly seven days - nights - to shoot this particular part. "For six nights, Vilma refused to do the scene," Celso recalled. "She was there all right, advancing one lame reason after another.

I was slowly losing my cool, till it came to a point that I refused to talk to her. Feeling my fury she gifted me with a bilao full of fruits. When she reported to the set the next day she was all ready, very willing. And she didn't disappoint me a bit. She's a born actress. Acting for her is no more difficult than brushing her teeth, going to the toilet. She uses Method acting without her knowing it." For the benefit of two other men in the room, Celso explained what this Method thing is. Another performer Celso's so proud of is Joonee Gamboa. "He's the greatest character actor who ever lived in the country," he swooned. Of all the players, however, it was Rollie Quizon who represented him. "Like the character he played, I used to be a weakling," he explained. "It's only now that I'm accepting responsibility, that I'm letting my inner self come out, that I'm really letting go." It was money matters which troubled him a lot. Such as the time when he needed gifts as props, and there was no money to buy these with. Such as the time when he needed a generator and there wasn't a drop of gasoline around. "If this happened to me when I was younger, say two years ago, I would have abandoned the project completely. I have changed considerably, if I say so myself. I am more mature now. What matters now is finishing the film I'm doing, nothing else." What expectations does he have for his film? Celso face lit, giving the sweetest smile. "It will shock and shatter the whole country," he said, "the very same way that Rocky, One Flew Over The Cuckoo's Nest and Carrie shocked and shattered the whole world. I expect it to give the local industry a much-needed shot in the arm. My Pinakamagandang Hayop Sa Balat Ng Lupa introduced such a thing as the wet look and it gave everybody a chance to make money.

I hope Burlesk will accomplish the same." Expectedly, directorial offers have been pouring in - Paraisong Kristal, Kandilang Bubog, Nang Ang Mundo'y Naging Laman at Dugo, being just a few of them. He has a personal project which he plans to film next year, something called Noche de Ronda. If he has his way he direct nothing but films showing the common man - "the girl who works in a siopao take-home counter, someone who is just about to die," he cited as examples. As soon as his schedule will permit, he'll go to Hong Kong and seek a job with Run Run Shaw. He believes this wil pave new roads for him, hopefully a Hollywood assignment. At the moment there's nothing more he'd like to do than get out and run away from everybody, friends and foes alike, donning the thickest, darkest glasses, bumming around as is his won't. The film has given him tremendous self-confidence. "I can take it easy now," he stresses. "After doing Burlesk I won't have to prove myself to anyone anymore. He talked about the film again, very obviously so close to his heart. "With it I wanted to show some kind of heroism," he explained. "In the movie Vilma is pregnant and she knows very well that by dancing the striptease she runs the risk of losing not only her baby but her own life. Yet, she goes on, dying in the end. I want to tell the audience - The show is over but the show must go on. Before doing it anything, one should ask himself, 'Is it worth it?" Vilma loses her life - is it really worth it?" What he fears most now is the sweet smell of success. "I couldn't imagine myself moving around in a plane or speedboat. When I do this, I will have finally prostituted my art." Still and all, he coundn't be happier with the way Burlesk Queen has turned out. "Ngayon, malalaman na kung sinong tunay o hindi," he gloated. - Robert Q. Castillo, MOD Magazine, Jan 6 1978 (READ MORE) 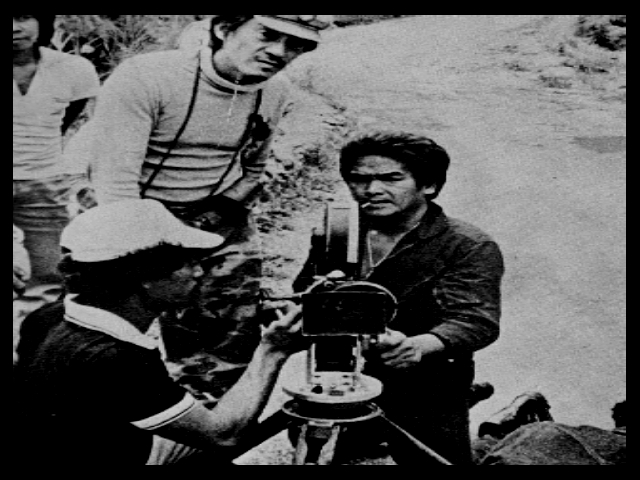