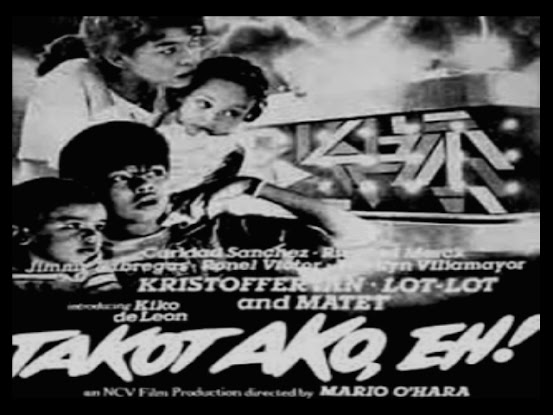 Film Reviews: "Poor Nora Aunor. Whether as a result of the trauma of her identification with the late unlamented Marcos regime or not, the fact remains that she parlayed her brood on the public when it was still suspicious of any move she would make thereafter. As it’s turning out, it wasn’t just her timing that was off; it’s the material as well – the content, if you will, of her latest career move, which has amounted to fostering on an apparently bewildered following all of her legal children. To be sure, the tots do seem to possess an acceptable amount of potential; at the very least, they could get by anywhere else on their unique brand of charisma, definitely drawn from their privileged intimacy with the only world-class multimedia phenomenon our culture has ever had the good fortune to witness. Aye, but that’s where the rub sets in. For why should the selfsame phenomenon ever decide for the very public that made her possible in the first place? Granting that her decision to campaign for the Marcoses was borne out of an abiding political naïveté (which I did and still do believe was the case), should the disapproval of an understandably outraged populace signal that her time on the stage (or tube or screen) of public life is up? Besides, if the promotional build-up of her kids had been already planned before the hue and cry of her disastrous sorties, there arises another, even more vexed issue – that of pushing a number of innocents into a situation which they may have good reasons for not preferring, if granted the maturity and independence of the proper coming-of-age status. The long and short of it is that Nora Aunor hasn’t yet given the public her fullest, judging from the upward arc of her recent performances, whether histrionic or vocal. If the masses seem to have lost a considerable amount of their admiration for her, then maybe it was high time that a reassessment of her public image were done anyway. If I may say so, better this new atmosphere of cynicism than the indiscriminate adulation everyone used to lavish on her. The solution lies in her coming to grips with a more critical audience through a no-nonsense display of that apparently bottomless reserve of talent she seems to be holding forth at the moment, rather than allowing a bunch of harmless but comparably less contributory minors take on the front lines for her. Meanwhile they’re here, all four of them, and every sensible movie fan should be caught up (as I am – a movie fan, that is) in the dilemma of wanting all those other poor orphans lying around to be adopted by such a distinctive mother, yet not wanting to have any more of such children turn into instant celebrities before their time. They’re all lumped together (and boy, do I mean lumped!) in their mother’s latest production, Takot Ako, Eh!

Actually I don’t intend my misgivings to mean that you should take the movie’s title as a piece of literal advice. The kids put up a brave struggle, I must admit their guts if nothing else (they’re mostly too young anyway) are worthy of their association with Aunor; and even she most carefully defers to them, by appearing in a low-key cameo and bowing out almost too soon before her presence begins to take hold. And that’s precisely where the trouble lies, friends. The kids couldn’t do yet without their mamma lending support, but if she did lend them enough, she’d surely wind up blotting them out. As a result, Takot Ako, Eh! suffers from a forward drive in its narrative, where the siblings, who play siblings, take too long to lead to a return to life of their dead mother, played by you-know-who; and when she does arrive, she just doesn’t stay long enough to develop dramatically. The Nora Aunor brood in Mario O’Hara’s Takot Ako, Eh! (1987), left to right: Ian de Leon (her son by Christopher de Leon) and Lotlot de Leon, standing; Matet de Leon, Jimmy Fabregas (playing the kids’ father), and Kiko de Leon, sitting. Not that I’m taking this entire outing seriously now, but you’ve got a team functioning here that’s capable of some impressive work, and in fact has done it before (in their previous effort, Tatlong Ina, Isang Anak, in fact). Aside from the weakness already pointed out, the sci-fi premise also demands a lot of imaginative stretching, not to mention state-of-the-art special effects, both of which are served short in this instance. Too bad; the material in Takot Ako, Eh! is far less pretentious than last year’s “Halimaw sa Banga” episode, and for that reason alone I kept waiting for the oportunity where it could serve to prove, as the full-length Halimaw did not, that all a horror movie need do to justify its existence and our appreciation of it is provide a good scare, regardless of our much-abused preoccupation with “social” messages.

The only evidence that Takot Ako, Eh! could not have been made by just anyone with the right money and resources lies in one extremely exclusive instance. This would take a whole lot of paring down and possibly a radical revision of the exposition, but if our point of reference is Halimaw, then you’d now have the best installment available for that omnibus product. I’m referring to the subplot involving Caridad Sanchez as a way-out househelp, not quite in her right mind yet not quite obtrusive enough to arouse anyone’s suspicions. Before the time machine brings back the Nora Aunor character it first spews out Dracula (a wonderfully with-it Richard Merck), who like all the previous males on the scene doesn’t really fall for the maid’s advances, but, unlike the rest, doesn’t have the advantage of remaining intact during daytime and going without blood. When Sanchez starts turning on the charm for her captive lover, all hell, for him at least, breaks loose, and one wishes for the most part that the final Countdown hadn’t been sooner. And to return to where we started: wasn’t this the kind of role – the maid, I mean in particular – that Nora Aunor became famous for? A character performer like Caridad Sanchez can think of nothing about shifting from serious to comic interpretations within more or less similar characterizations (check out two temporally disparate Lino Brocka films, Santiago and Ano ang Kulay ng Mukha ng Diyos?, plus her critically underrated salvo in Marilou Diaz-Abaya’s Alyas Baby Tsina, for a sober accounting of the lady’s prowess); on the other hand, a Nora Aunor can only work on a highly involved plane of acting, in fact as in film. Forced to a distance (considering her bygone stature as the superstar of Cebuano cinema), Sanchez takes full advantage by playing to the hilt, damn the consequences, and involves everyone else in her having fun even at her own expense; Nora Aunor offers a weak substitute of herself, four of them in fact, and politely takes her place in the background. Somewhere there’s a metaphor for the human capacity for excessive celebrity, and the sadness of losing a precious sort of genius when the condition begins to take its toll." - Joel David, National Midweek, 25 November 25, 1987 (READ MORE)