Plot Description: Mina (Vilma Santos) is a commercial model struggling to provide financial assistance to her ill mother when she meets the arrogant painter Dino (Romeo Vasquez). He offers her to be a model for his work of art which she accepted. This has drawn them closer to each other until Mina learns of Dino's past relationship that eventually becomes a hindrance to their budding romance. Meanwhile, Mina's best friend Laura (Nora Aunor) has always been in love with Angelo (Tirso Cruz III). However, due to their parent's rivalry and Angelo's mother coercing him to become a priest, they separated. During this time, Laura is raped by her long-time suitor which resulted to unwanted pregnancy. Years after, Angelo who fails to endure being away from his true love, Laura, returns to ask for her hand in marriage. Everything seems well for the couple until the real father of Laura's first child comes back. Angelo is overwhelmed with jealousy that he starts to ruin the picture-perfect family they had before. Find out how the two friends will resolve their trouble relationships in this classic film you'll never forget.

Film Reviews: "Sometime in the mid 70s, matinee idol Romeo Vasquez returned to the movie scene after a long absence, his movie career in limbo after his failed marriage with popular actress Amalia Fuentes. His teamup with Vilma Santos somehow rekindled and revived his career. Their first movie together, Nag-aapoy na Damdamin in 1976 turned out to be a big hit. Despite their age gap, reel and real life sweetheart, Romeo, 34 and Vilma, 23, soon became the hottest love team, doing one hit movies after another..." - Video 48 (READ MORE)

"...But it was with handsome actor Romeo Vasquez that Vilma Santos had her most controversial relationship. Romeo was the former husband of Philippine movie queen Amalia Fuentes. He and Vilma first paired in the movie Nag-aapoy na Damdamin (1976). It was also during this year that they became a couple. They made several movies together, all of which did well at the box-office. Vi and Bobby (Romeo's nickname) became the most-talked about reel and real love team at the time. The relationship was always on the pages of showbiz magazines and tabloid entertainment section pages because of the intrigues and the personalities who got involved with them..." - Rommel R. Llanes (READ MORE) 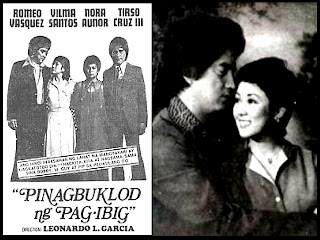