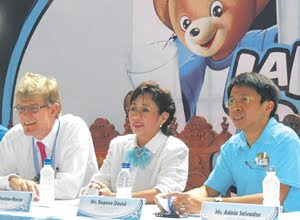 one milk critic - "IS Vilma aware that her victims are infants? She is a detriment to the nutrition of infants. Paid to promote Bear Brand, she continues to deceive mothers on the differences between this manufacturer’s milk of 30 years ago, to what Vilma now erroneously calls in her ads "milk." Globally, when an adulterant is added to milk, it can no longer be called "milk."...What Vilma calls milk has had its butterfat removed. Butterfat is milk’s most needed by infants. With its butterfat removed, and high-saturate palm oil added, Vilma is promoting milk that is legally no longer milk, not good enough for infants...Bear Brand sold good pure milk 30 years ago. Their technologists learned to remove the good expensive nutrients from pure milk, and replace it with adulterants like palm oil which is not good for infants or adults. Palm oil contains too much saturate which turns to cholesterol...There are products in the supermarkets not advertised to extremes, and do not deceive. I buy an Australian brand called "___" Milk Powder...." (Vilma’s adulterated milk)

when an adulterant is added to milk, it can no longer be called "milk" - Well, our milk critic is correct. When you adulterated a milk, its no longer a "MILK."  One question though, where was her proof? We did a brief digging and we cannot find anything via internet of any news, articles or research about Bear Brand substituting any "adulterant" to their powder milk. What we found was the actual ingredients in their product. Here is the link: Nutrient Disclosure infant formula. Here is the nutritional fact link. A newspaper article described Bear Brand Powdered Milk Drink: "rich in calcium, which is important in building strong bones and teeth. It is recommended for children to be consistent in drinking milk as bone growth is at its highest during childhood up to the teenage years." (Bear Brand helps address malnutrition problems)

butterfat removed and high-saturate palm oil added - Again our critic did NOT mentioned where is she getting this info. Our research though proves some contradiction in our critic's assertions. First, some additives to powder milk, for example, vegetable oil, zinc, or iodine are not necessarily bad for infant consumption. Second, butterfat milk are not as prestine as what our critics' assert, for instance, a pure cow's milk with butterfat may be hard for an infants to digest.  About saturated fats in milk, first, raw milk already contained saturated fats and secondly, not all saturated fats are bad or "cholesterolemic.". 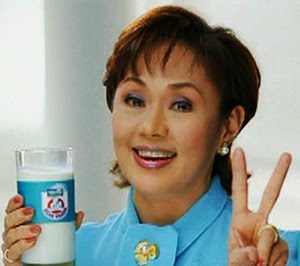 paid to push on children is to deceive, lack knowledge about milk terminology, its detriment to infants and children - Once again, no proof of all these criticism.  We discovered something though, the producer of Bear Brand, Nestle Philippines, made an effort to inform the public about one of their milk product.  They clearly indicated in BOLD letters that: "Bear Brand Evaporated Milk_375ml contains only 1/4 the fat of cream and is "NOT SUITABLE AS A COMPLETE MILK FOOD FOR INFANTS."  This is clearly, not a kind of company who would try to deceive their customers.  Which can be also be said to their endorser, Vilma Santos Recto.  I mean would a seasoned politician gamble her reputation for a defected product?  She may not look like your typical politician but she is well informed and connected.  Our critic even mention her politician husband, would he even allowed such product to ruin their names specially in their future re-election year, remember VSR did this endorsement back 2008. Finally, With all these "righteous arguments" about "for the sake our children", our critics ended her article by endorsing an Australian milk product which was quite hypocritical, clearly, this is another propaganda news.

helps to address local micronutrient deficiencies - "...Bear Brand launched a powdered milk in 2009 that helps to address local micronutrient deficiencies through iron, zinc, vitamin A and vitamin C fortification. Additionally, it is the only brand in the Philippines with added vitamin C and zinc, both of which are required for normal function of the immune system. The milk is offered in an affordable price (equivalent to CHF 0.20) and is widely available in traditional neighbourhood stores..." (Fortified Milk Powder)

advocacy - “We want to remind mothers to bring back the habit of drinking milk. The health of our children is most important and should be our priority,” Santos-Recto said...“For years we’ve been touching the lives of so many, and we’re happy that our advocacy has become an extra arm for all parents whose dream is to give their children a better future, and for all schoolchildren who deserve a better life,” said Eugene David, business executive manager for dairy health and nutrition solutions for Nestlé Philippines. This year the Laki sa Gatas advocacy team is eyeing several more provinces for its series of nutrition lectures and activities like Bataan, Aurora, Nueva Vizcaya and Zamboanga. It aims to cover more than 700,000 students and more than 400,000 parents..." (Nestlé pushes 2 glasses of milk daily for school kids) 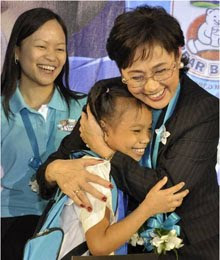