In the egoistic world of movie stardom or stardoom, there are no permanent friends or enemies, only permanent interests. Stars may hate each other to death but in the name of “professionalism,” the show must go on. They dig into the characters once the director yells action! And quickly revert to their bitchy and selfish ways once the director says cut or pack-up. Dedmahan blues. ”Masquerade, paper faces on parade, masquerade!” Amalia Fuentes and Susan Roces were the original “pabilog” billing movie queens, such as in Cover Girls, which was produced by the late FPJ. Vilma Santos and Nora Aunor followed suit via their “Ikaw ay Akin” and “T-Bird at Ako” projects. Susan and Amalia became friends at mag-kumare in real life, ditto with Nora Aunor and Vilma Santos. 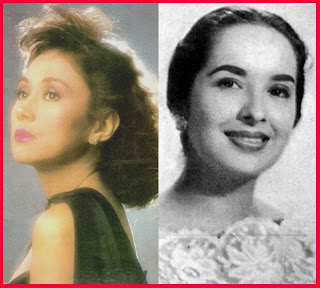 Ego aside, Gloria Romero, forever the revered movie queen then and now, was billed second to the late Nida Blanca in such movies as “Huwang Kang Sumingit,” together with their ka-love teams Nestor De Villa (SLN) and Luis Gonzales. Interestingly, Nida and Gloria were close friends up to the time of Nida’s gory death (whatever happened to her murder case?). I recalled how the regal La Romero (Saan Nagtatago ang Pag-ibig?) lovingly threw a flying kiss to her “rival” Nida (Kid, Huwag Kang Susuko) who defeated her for the best supporting race in the 1987 FAMAS when Nida said: “sorry, “Mare, di ko sinasadya!” Terms of endearment. Unfortunately, it did not happen between the late Charito Solis and the ‘60’s Uncrowned Movie Queen Amalia Fuentes. The volcanic and a stickler for details Charito Solis ignored the ‘60’s “taray movie queen” Amalia Fuentes and vice versa while doing a Regal Film Mother’s day film in the 80’s. La Solis enjoyed top billing over the former movie and box-office champ La Fuentes. They just did not click, period. Charito only allowed to be billed second to dramatic great Lolita Rodriguez (Ina, Kapatid, Anak), and to Vilma Santos in such movies as Dolzura Cortez and Ipagpatawad Mo. As far as I know, only Eddie Garcia and Gloria Romero are two stars who never had billingitis. There are no small roles. It is how you interpret them. That is why they are still very much around. Because of their stature in the movie industry, the studios respected them and knew how to put them in their proper place. As fate would have it, billing was never a problem between the Veteran Movie Queen Gloria Romero and the Philippines’ Movie Queen for All Seasons Vilma Santos. Ms. Romero, the ever practical and realistic auteur has so much respect and love for her “daughter” Ms. Santos that she allowed to be billed after the longest reigning box-office and movie queen since the 70’s (the monster hit “Lipad, Darna, Lipad” and the blockbusters “Nakakahiya I and II,” for example).

Let’s start from the very beginning, a very good place to start. When you act, you begin and end with humility and professionalism. The young Vilma acquired and inherited these traits from her favorite actresses Lolita Rodriguez and Gloria Romero. The dramatic child actress learned fast from her co-stars/mentors Lolita (Trudis Liit) and Gloria (Anak, ang Iyong Ina). As she was growing up, Vilma played daughter to Lolita, Gloria and Marlene Dauden. She even won a best supporting actress for her performance in the Lolita-Eddie-Marlene troika of a movie, Kasalanan Kaya? But it was the Gloria/Vilma collaborations that are forever etched in the minds and hearts of every Pinoy filmgoer, including yours truly. Ms. Romero was born in 1933 while Ms. Santos was born in 1953. Talk of 20 degrees of separation. And more than four decades as best friends and colleagues.

1963 – Anak, Ang Iyong Ina – Vilma has “two” mothers in Gloria Romero and the late Ms. Rita Gomez. Vilma’s name was itsy bitsy tiny in the theater marquees. She started her career right, to be acting with the brilliant and professional actors of the era.

1968 – De Colores – An all-star cast flick with such superstars as Joseph Estrada, Amalia Fuentes, and Gloria Romero. Despite multiple episodic stories of this movie about the “cult” “religious” revival among the elite Catholics, Vilma was in a forgettable episode. I wasn’t sure if she played a rebellious daughter turned good via the Cursillo, and whether she shared scenes with Ms. Romero. What mattered was that she bumped into her Tita Gloria on the set. More bonding, please.

1969 – Pinagbuklod ng Langit – Vilma, now 16, reprises her role as Imee. No longer a girl, not yet a woman, Vilma was competent in her role like her Mommy Imelda (Gloria).

1973 – Lipad, Darna, Lipad – Vilma, now 20, still looking virginal and sweet kicked 70’s phenomenal superstar Nora’s butt at the boxoffice and earned her box-office wings via this monumental hit. The Emancipation of Baby Vi. Mariah Carey could not agree more. There was no turning back since then. The Fantasy Queen was born. Forty-three year old Tita Gloria gamely and bravely accepted the role of Ms. Luna, teacher by day and Manananggal by night. Movie Queen Gloria was deglamorized and became the evil incarnate as a vampire. Amalia Fuentes was the original movie queen who bravely accepted a daring role such as a vampire that won her a FAMAS statuette in Gerry De Leon’s Ibulong Mo Sa Hangin, and changed her goody-two-shoe image forever. Was she the original queen of reinvention that gave Vilma an idea to do the same via the landmark movie Burlesk Queen? Hmmm…for the first time, La Santos was billed above La Romero. Times have changed. The tables were turned. Vilma Santos is the New Box-Office Champ and Tita Glo and Company could only “bow” to the Reel/Real Queen: Ms. Rita Gomez, Helen Gamboa, Boots Anson-Roa, Barbara Perez and others did not have second thoughts to do a movie with the resurgent Vilma. Who wouldn’t want to be famous again and have fun working with the most hardworking and versatile actress? In my book, the aerial Good versus Evil fight of Vilma and Gloria as Darna and Impakta was one of the most thrilling and unforgettable scenes of my movie-going life. How I wish the movie resurfaces from Indonesia or from Timbuktu and my Vilma collection will be complete. That will be heaven! Where, oh, where is that classic movie? The Manananggal episode of Lipad, Darna, Lipad was so good that the two have to followed up their success via “Anak Ng Aswang.”

1973 – Anak ng Asuwang – featuring the Vilma/Gloria mother and daughter team had to be made. Gloria reprised her role as the vampire minus Darna. Vilma was her “doomed” daughter. Gloria was so identified as Impakta that when the second Darna flick came about she have to do do a cameo appearance!

1973 – Darna and the Giants – was shown at the Manila Film Festival, Gloria had a cameo role as a “mysterious” woman who comes out at night. People couldn’t get enough of La Romero and La Santos together. The film was a top grosser at the festival. Vilma is Darna and vice-versa. No doubt, she is the real Box-office Queen! Isa pa nga!

1975 – Nakakahiya – Starring Eddie Rodriguez who was married to Barbara Perez who was the best friend of Gloria Romero whose daughter (again!) Vilma Santos fell in love with Mr. Rodriguez, Vilma’s first of May-December flicks. Oh, what a shame and a scandal in the family. A Morality play? You betcha. It’s the 70’s and the times they were changin’. Nakakahiya? Vilma donned a bikini for the first time and the public did not mind. Vilma and Eddie were so good that they triumphed at the Bacolod City Film Festival. Best Picture. Best Director. Best Actress. Best Actor. Beating the likes of Nora Aunor and Gerry De Leon. Ms. Romero and Ms. Perez did not mind second billings. It’s the role that mattered most.

1975 – Karugtong ng Kahapon – Starring Vilma, daughter of a “happy” couple Eddie Garcia and Gloria Romero. Throw in the other woman of Eddie, Celia Rodriguez and as expected, another morality play was born. Shown at the first MMFF.

1990 – Kapag Langit ang Humatol – The scene where the avenging Floreida (Vilma) to Gloria’s Octavia- wine-in-your face thing, followed by Vilma’s hysterical laughter is, to my mind the best scene in the movie. Catharsis at its best. Two great actresses. Bow!

As if Fate would have it, who would ever think that the Two Queens would duke it out in the 2000 awards derbies? Anak versus Tanging Yaman. Gloria may have won the Urian but she shared the award with her “daughter”: “I share this award with Ms. Vilma Santos who is so good in Anak.” So what do Vilma Santos and Gloria Romero have in common? Why are they still Philippine Cinema’s Regal Movie Queens? They are both professionals, humble in both defeat and victory, clean living, and have respect for the profession that is their bread and butter. They are the Katherine Hepburn and the Meryl Streep of the Philippines. Kate Hepburn disliked Streep in real life. She called Ms. Streep’s acting too cerebral. Was it envy, billingitis, or ego? Thank heavens for Gloria and Vilma. They respect and love each other. Terms of endearment. Friends for life. We shall never see their kind anymore. Vilma Santos and Gloria Romero. When will we see them on the big screen again? May their tribe increase! - Mario O. Garces, V magazine, Volume 1, Issue 4 Oct/Nov 2005