The Superstar at 18 Vilma Blooms 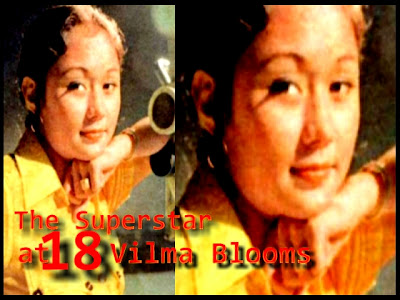 “Ay naku, musmos pa ‘yan talagang mahilig na sa drama!” And Mrs. Milagros Santos (or Mommy Santos, as she is fondly called by diehard fans), mother of Superstar Vilma, proceeds to relate how her darling daughter religiously followed her favorite soap-operas on the radio in her off-school hours, imitating the airlane actresses later on when the family gathered at the sala. “Umiiyak pa ‘yan,” Mommy Santos goes on, “and she really cried real tears.” Of course, Vi’s histrionic potentials didn’t escape the attention of her teachers in school. Everytime there was an affair on the campus, she would be there on stage, either delivering a declamation, singing a song or making like a little Rosa Mia in a drama skit. One day in 1962, eight-year old Vi tagged along with her uncle Amaury Agra (a cameraman) to the Sampaguita Studios to watch her favorite actresses and actors act before the cameras. Doc Perez saw her and was so fascinated by Vi’s lovable ways that, there and then, he let her play one of the two waifs in the tearjerker, Anak, Ang Iyong Ina!, a Lolita Rodriguez-Luis Gonzales starrer, afilming at that time. “Doc didn’t even give me a screen test,” Vi cuts in.

Days later, during a shooting lull, Vi wandered around the huge studio and found herself in the office of Doc Perez where some 800 tots were being tested for the title role of the next Sampaguita film. By accident, Vi got into the contest and walked away with the coveted role hands down. “Doc asked me to cry, umiyak naman ako,” Vi recalls, “he asked me to laugh, tumawa naman ako ng husto, ganyan. He asked me to do many other things. He must have been impressed dahil he assigned the role of Trudis Liit kaagad to me.” That was how Vilma Santos broke into the big screen. “My real name is actually Rosa Vilma Santos. Pero sabi ni Doc, there were several Rosa’s in the movies already, may Rosa Mia, may Rosa Rosal, may Rosa Aguirre, so he decided to drop Rosa from my name.” For four years, from 1962 to 66, there was hardly any tearjerker without Vilma Santos in the cast. A born actress, she was very precocious and had a notably alacrity for giving in to what her roles demanded. She absorbed difficult and emotion-filled dialogues with ease and acted her parts very naturally. As a child actress, she chalked up more than a dozen movies and had ably pitted acting talents with such drama stalwarts as Eddie Rodriguez, Marlene Dauden, Lolita Rodriguez and Luis Gonzales. “I have two favorite pictures as a child actress, “ she says. “ang isa ‘yong Trudis Liit nga and the other is Ging where I portrayed the role of a child actress. When I saw the first movie sa sine, I cried because I pitied myself in the movie, kawawa kasi ako doon, e. It was s sob story you know, at kahit siguro ikaw maiiyak ka rin.

In Ging, nahirapan ako ng katakut-takot because it was heavy drama. Pero it gave me a very good chance to really act dahil it had a little of everything, a little drama, a little musical, a little comedy, a little of marami pang iba.” She had to stop appearing in the movies after finishing grade school. “I wanted to concentrate on my studies, that’s why I enrolled at the St. Mary’s Academy. I wanted to take up Fine Arts after graduation. I loved to paint noon, you know, pero ngayon, hindi na masyado.” But once an actress, so the saying goes, always an actress. Vi was in her third year high school when she felt an irresistable itch to work again before the cameras. At first, her parents (Mr. and Mrs. Amado Constantino Santos) were reluctant but a compromise was reached: no shooting during her class schedules. By this time, Vilma was growing up to be a lady. This was mid-1969. The advent of 1970 brought new prospects for Vi and her young colleagues. Susan Roces and Amalia Fuentes had got hitched and there was some sort of a “search for another queen” in local filmdom. Because she had a strong public appeal and very endearing ways with her legions of followers (Vilmanians!) Vi was easily considered a possible successor to the throne left vacant by Susan and Amalia.

But she had a rival in the person of Nora Aunor. “There’s realy no personal rivalry between us,” she assures. “Friends kami, e.” It was when she got paired with Edgar Mortiz (Vi’s boyfriend on and off the camera) that Vi’s star shone doubly brighter in the movie firmament. The team up also did good to Edgar. First paired in Sampaguita’s Young Love (where they appeared with Nora Aunor and Tirso Cruz III), Vi and Edgar have now finished more than two dozen films, all of them veritable box-office hits. The two are under contract with Tagalog Ilang-Ilang Productions but they have an option to make pictures with other outfits with the proper consent of TIIP bosses. “I like Bobot (that’s how Edgar is called by Vi and their fans) naman because mabait siya at gentleman,” Vi smiles. The crowning glory of their careers came early this year when they won as Mr and Miss Philippine Movies in a nationwide popularity contest conducted by a vernacular magazine. Their coronation grabbed the headlines when some fans of defeated stars staged a rampage, prompting Mommy Santos to announce on the microphone that “it was not our side that started the commotion. ” Aside from being good neighbors in a subdivision in Quezon City, Vi and Edgar are ‘always together’ anywhere they go. In addition to their movie work, they have also two regular shows on television, The Sensations (which was made into a movie) and Edgar Loves Vilma, both on Channel 2. 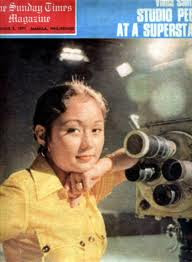 They also did several recordings together, all of them a sellout. Vi waxed her first (solo) single when she was 16 and the title of the song was Sixteen. But Vi has a drawing power all her own. No matter who her leading man is, her movies invariably attract moviegoers. Ikaw Lamang, where she had Paolo Romero for her love interest, was acclaimed topgrosser in the Quezon City Film Festival last September. One of her latest pictures, Teen-age Senorita with Manny de Leon, grossed no less than P40,000 on its first day showing in two theaters. (The movie was made by Zodiac Films, an outfit owned by Manny’s family.) Vi celebrated her 18th birthday last November 3 in a style befitting a superstar. There was a whole-day celebration; fans from as far north as Ilocos and as far south as Cebu came to greet her. The unforgettable day was capped with a formal ball at The Plaza where Vi had no less than Manda Elizalde, the senatorial candidate she and Bobot had campaigned for in the last elections, as a special guest. And like a faithful boyfriend, Edgar stayed close to Vilma throughout the affair. Two weeks later, the two left to make two movies in Hawaii and USA. At 18, you may ask, what else does Vilma Santos crave for? “Not much”, she says. “I just hope that good things will continue to happen to me, that my fans will remain loyal and true.” Despite success, Vi has remained level-headed; she has admirably kept her sweet and charming disposition. Even when confronted with malicious gossip about her, she just remains calm: “I don’t mind rumors very much. As a movie star, I am susceptible to gossips, but I choose to ignore them.” And because she is truly aware that stardom is temporary, Vilma Santos doesn’t mind working hard now, accepting the many offers that come her way as long as they don’t endanger her health -and her image. “My philosophy is simple,” she says, “Make hay while the sun shines.” Mommy Santos could only nod in agreement. Written by Ricardo F. Lo, The Sunday Times Magazine, Dec. 5, 1971