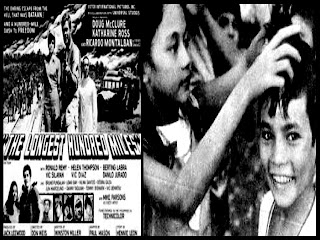 About the film: - "...During the Japanese invasion of the Philippines, an assorted group of refugees, including an American soldier, an Army nurse, a priest and a group of local children, try to make their getaway aboard a rattletrap, creaky bus. The Longest Hundred Miles was among the first feature films produced specifically for television. Doug McClure stars as an American GI, stationed in the Philippines during World War II. Reluctantly, McClure is persuaded by army nurse Katharine Ross and local priest Ricardo Montalban to transport a bus load of native children across enemy lines. Filmed inexpensively on the Universal back lot, the film is distinguished by the musical score of Oscar-winning composer Franz Waxman. The Longest Hundred Miles debuted January 21, 1967. Vilma Santos’ first film for international release; Entry to the 1967 Manila Film Festival. 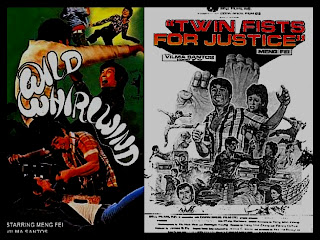 About the film: - Directed by Danny Ochoa and Ching-Yang Chen (stars – Phillip Gamboa, Vilma Santos and Meng Fei). When a poor wretch to his heir apparent of a large fortune, he finds himself in a web of intrigue. Nothing is what it seems when he receives the key to bring him to his wealth. Criminals sit on his heels and when he seeks help from justice appears to be corrupt. He will do everything possible and literally have to fight for his inheritance. 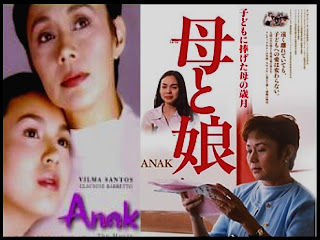 About the film: - The main character is a Filipina Overseas Contract Worker, one of the many residents of the archipelago who is forced to leave her family and take a higher paying job in a more prosperous Asian country. While she is working her employer refuses to let her take a vacation, nor does he deliver her mail to her. She is unaware, therefore, that her husband has died. When she finally returns to the Philippines, she is met with resentment and hatred by her children. The movie studies how she overcomes these feelings and rebuilds the relationship with her family. 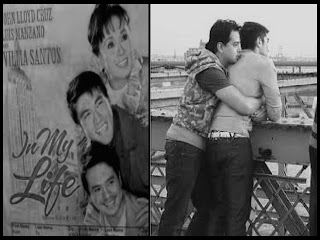 About the film: - Santos plays Shirley, a public school librarian who wants to be in control of everything. Her unwarranted intervention in the lives of her children and their families leads to their emotional detachment from each other. Feeling she has lost her command over her children, she flies to New York to reunite with his estranged son, Mark (Manzano) only to find out that her son is gay and she has to live with him and his lover, illegal immigrant Noel (Cruz). As Shirley struggles to deal with the situation and with living in the Big Apple, she discovers that being gay is not the only huge secret that Mark is keeping. Discovering what this is will change Shirley’s life forever. In My life screened in selected cities in United States and Canada in October of 2009 with huge success. 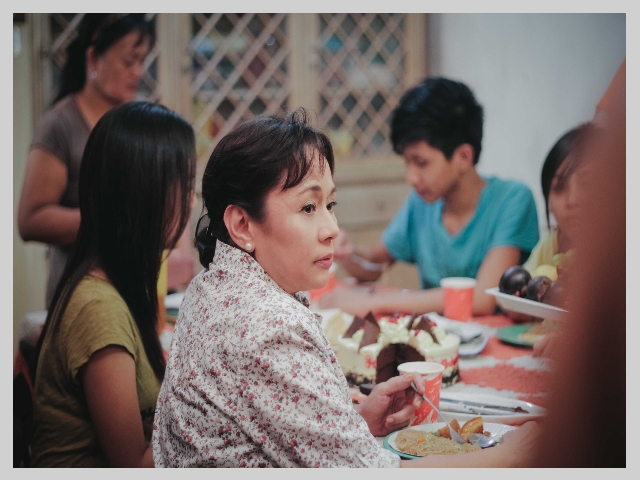 About the film: - "...Ekstra" is a very entertaining film that brings us into the world of a bit player or "ekstra" in the punishing world of television soap operas, where hectic daily shooting deadlines are the norm. This was not only a glimpse for the audience, but more of an immersion. We get an in-depth, no-holds-barred, brutally frank expose on how bit players are treated on and off the set of a location shoot. Loida Malabanan has been a bit player for many years already. This job, however unstable, had enabled her to get her daughter through college even as a single mother, albeit barely...Ms. Vilma Santos is the heart and soul of this film, and she was such a paradox in this role. She portrays her role in the most natural and realistic way, yet we know the character was so NOT her. Ms. Vilma was already the lead star in her very first film, "Trudis Liit"! Incredibly, she was able to successfully dim her megawatt star power to appear inferior in stature to stars like Marian Rivera and Piolo Pascual who were the lead stars of the soap being shot, yet Ms. Vilma still manages to outshine them all. Her most effective scenes had no spoken lines at all. Ms. Cherie Gil was so deliciously campy good in her villainous Doña Beatriz character. Tart Carlos, more popularly known for her role as the ditsy maid Doris on TV's "Be Careful With My Heart," has a marked role playing Loida's friend and co-extra, where her skills in comedy shone. Musical director Vincent de Jesus was very effective as the harried assistant director, scrambling to accomplish all the orders of the impatient director..." - Fred Hawson, ABS-CBN News, 29 July 2013 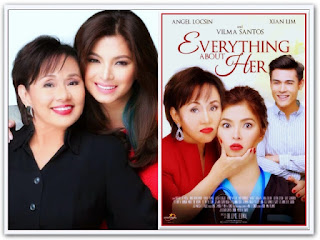 About the film: - Powerful but ill-stricken business woman, Vivian Rabaya (Vilma Santos) navigates her complicated relationship with her caregiver, Jaica Domingo (Angel Locsin) and her estranged son, Albert Mitra (Xian Lim) in this story about acceptance, love and forgiveness. - IMDB

The film earned ₱15 million on its first day of release; As of February 5, 2016 the film has earned ₱100 million; The film is graded A by the Cinema Evaluation Board (CEB) and is rated PG (Parental Guidance) by the Movie and Television Review and Classification Board (Wikipedia); All-Time U.S. and Canada Box Office - Weekend of Feb. 12, 2016 -Feb. 14, 2016 Weekend Gross #32 $245,000; Cumulative Gross for two weeks: $1,248,700 (59,474,956.65 Philippine Peso); # of Theaters: 50 (NY Times); Star Cinema's most heartwarming movie of the season, "Everything About Her," has already earned P208M worldwide since it opened in cinemas. Star Cinema Ad Prom director Roxy Liquigan posted the good news via his Twitter account last February 16. (Star Cinema ABS-CBN)