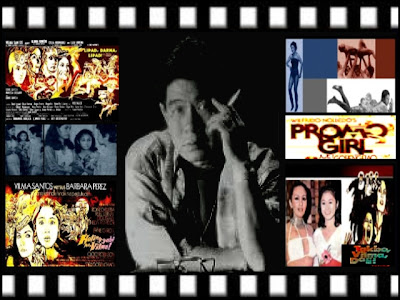 "When I was small, we stayed on teh second floor of a moviehouse in Cagayan where my uncle owns a chain of moviehouses. During mealtime, I would eat at the balcony section so I could watch a movie at the same time. Noon, ang pelikula ay parang isang visionary world, parang it's so far away and so high up there. I was fascinated no end by how a movie was made. I told myself, someday I too will make a movie."

There are three important periods in Joey Gonsiengfiao's life as a director: his UE period when he shuttled between classroom and stage, trying to finish AB while presenting one big play on campus every semester; his Tower Periiod when he socialized in the show-biz circles and made abortive movie debut; and his Sine Pilipino Period when he learned from his past mistakes, helped form a trend-setting box-office movie director.

UE Period - One remembers Joey as that diminutive, chinky-eyed fellow who would come panting to the Literary Criticism class at UE where he was a dropout and over-stayed for 10 years (1959-1969). Together with a big guy named Elwood Perez (now also a movie director), Joey would dominate the class discussions. The two were campus celebrities of sorts; Elwood wrote movie reviews for his column in Dawn, the college paper, while Joey directed stage plays (Becket, The Lark, My Fair Lady, Gigi, and The Glass Menagerie, which starred his signature actor Nestor Torre). Joey was forever rehearsing and his classes were such a hassle that he would drop all of his subjects every semester. He was a scholar.

"The nearest visionary world to movies for me was the stage," Joey says. "As a kid, I wanted to act in plays. Kapag hindi ako kasali sa bilada, aba, kinakausap ko ang titser." At UE, Joey attended workshops and seminars and studied under Rolando Tinio, his mentor. Foundationd Day celebrations were never complete without a Joey Gosiengfiao play. What he learned on campus came in handy when he was assigned by Cecile Guidote to the Balentataw drama series on the defunct Channel 5, the TV arm of PETA.

Tower Period - His Tower Period began in 1970 when he bumped into PR Man Douglas Quijano of Tower Productions. It was Joey's introduction to the glamour-and-glitter whirl - "it was my "socializing" days," Joey put it more aptly. "I had fun with my new-found friend movie scribes." One morning, Joey woke up to realize that his contemporaries had all made their maiden movie ventures: Lino Brocka was being lauded for his Wanted: Perfect Mother, Ishmael Bernal for his critically and commercially successful Pagdating sa Dulo. Even his UE buddy Elwood managed to wrap up his own, Blue Boy, a dud. Joey approached Douglas and wailed, "Ay naku, Douglas, mamamatay na ako pag wala akong pelikula. Maloloko na ako. Mayroon an silang lahat, ako na alng ang wala." Two weeks later, Temyong Marquez, Big Boss of Tower, surprised Joey with an assignment - "Nora Aunor pa mandin," Joey recalls, "at pagka-ganda-ganda ng pamagat, Beautiful Love. It was my first film and I was excited. I wrote the script at nagulat pa ako dahil approved kaagad ni Director Marquez before he even read the script."

The film didn't come out beautifully. After shooting some scenes in Manila, the Tower entourage went for location filming in Iriga, Camarines Sur, hometown of Nora. The movie was barely one-third through when Nora Aunor dropped the bomb that nearly shattered Tower to pieces: "Tumakas ang Nora, hindi natuloy ang pelikula." That was the time when Tower and Sampaguita were having a tug-of-war over La Aunor. The abortive screen debut didn't bruise Joey's ego a bit. His wits recovered, Joey tackled his next assignment: Funny Girl, starring international teenage hearthrob Sajid Khan and local glamour girl Tina Revilla. It was a financial flop. To nurse his disappointment, Joey sought solace in directing TV shows. "Those two films were a bakya compromise," Joey says. "I have learned my lesson, that is never to compromise. Everybody was telling me noon, "Hoy, Joey, kailangan gumawa ka ng...hindi naman mediocre movie...but something with mass appeal. Kailangan kumita ang pelikula mo kung hindi wala ka nang pelikulang susunod." Kaya nagisip-isip ako, sabi ko, why not? One movie critic called Funny Girl the total concept of a bakya production, which it was. Bakya nga, pero hindi rin naman nag-click. So I resolved to do what I believe will make good at the box-office."

Sine Pilipino Period - Joey re-emerged in the movie scene in 1972, bristling with fresh ideas. This time he made a big gamble by helping his brother Victor and some friends put up Sine Pilipino, the company that would revolutionize trends in local movie-making. SP specializes in campy, stylish movies with imperative, three-word titles: Takbo, Vilma, Dali; Hatinggabi na, Vilma; Zoom, Zoom Superman!l; Si Popeye Atbp.; and Sunugin Ang Samar. Except for the last mentioned which was an action saga, the four SP flicks were spoofs characterized by madness. They revived the all-star casting system, lumping together in one movie several big stars. The flicks made money. Joey Gosiengfiao had his "sweet revenge." "It was not wasy for us in the beginning," Joey relates. "Just before the showing of our first film, Takbo, Vilma Dali!, Martial Law was declared. There were no newspapers then so we had to post bills all over the city, hanggang Pasay nagdidikit kami nina Douglas. We also distributed hand bills. Sa awa ng Diyos, kumita ang pelikula." Of the films he has done, Joey considers Sunugin Ang Samar as the most difficult, not only because of its scope but also because action is not his forte. It took him three months to make the movie because the script (by Wilfrido Nolledo) called for different settings and they had to move from one place to another. Joey didn't exactly follow Nolledo's script but he saw to it that "the spirit was retained." Of late, Joey has organized his own company called Juan de la Cruz Productions together with Elwood and Douglas. Their inital production, Asawa Mo, Asawa KO, was a moneymaker. SP specializes in home-movie types while JC makes more of the woman's movie, "that's because we are not good for action pictures." Joey is now connected with SP only as a director.  "My main purpose as a director is to entertain the public," say Joey. "It's very rare that I put in any social message. JC movie deal with the individual rather than the social, more on the problems of the individual which may not be very relevant to society."

As a producer, Joey knows the high cost of production so he tries to economize on negative by practising what he calls the "pre-editing method." He makes sure that every shot is good, that no footage is wasted. Luckily for Joey, he never has any encounter with obdurate stars; all those he has worked with are easy to handle and cooperative. His favourite actress is, obviously, Celia Rodriguez whom he has directed twice before and who is cast in her secon-starring role in La Paloma, JC's latest offering (also scripted by Nolledo). La Paloma is a bold experimental film for two reasong: (1) it's done in black and white (which is a big risk in these time of color films), and (2), it boasts no box-office stars. "Celia is nice and difficult to work with," says Joey, "nice because we communicate and difficult because, like all good natural actresses, she has her insecurities and tantrums which result in misbehavior and antipathy. Pero hindi naman siya antipatika, ha. Madalas kaming magsigawan sa set; sometimes, gusto niya mauna siyang mag-shooting pero hindi naman puede dahil kailangan mayroon mauuna. Ayan, we would shout at each other na, "Please naman Celia," I would scream, "don't give me any more problems, marami na nga akong problema, mabuti kung ikaw lang ang mayroon." Pero after a while, kiss and make up na kami..." Joey Gosiengfiao has a last found true happiness. Expressweek, December 12 1974

About Direct Joey - "...Joey Gosiengfiao's films are anything but righteous, much less respectable. That was their glory and greatness, and the reason he could never win an award--Christ, I think, with his abhorrence of respectability, would like the man's style. Take, for example, the scene between Eddie Gutierrez and Ricky Belmonte in Bomba Star (roughly translated, Porn Star, 1980): Belmonte has just been jilted by Alma Moreno (incredibly young and beautiful here), and Gutierrez is consoling him; at a certain point, Guiterrez's embraces become more than just consoling, becomes in fact incriminating. Enter Gutierrez's lover, played by Marissa Delgado--she doesn't do anything, just strikes a glamour pose, a sardonic expression on her face and the world's longest cigarette holder between her fingers. I wish I could explain why the moment is so irreducibly funny, but I can't; if I could, I suspect it wouldn't be funny at all. Gosiengfiao wasn't just campy; his love scenes can be offhandedly sensual in startling ways. I remember gasping in shock in Nights of Serafina (1996 -- his last feature film) when, in a showcase of passion Mike Magat shoves Georgia Ortega's face into a tray full of food, Ortega moaning in pleasurable response. It was a disgusting, demeaning, swinish display--and powerfully erotic (it was also a brilliant parody of James Cagney's grapefruit scene in The Public Enemy)..." (READ MORE)