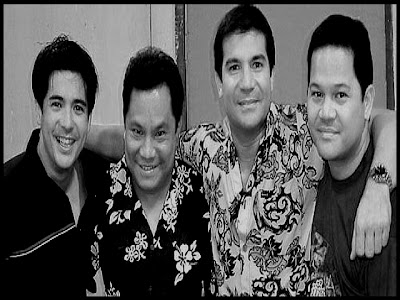 Reviews: "...With a guest list that includes Sharon Cuneta, Regine Velasquez, Roderick Paulate, and several top-secret guest appearances, OK Fine! Whatevers definitely become a must-see show for ABS-CBNs Tuesday primetime lineup. New cast additions Edu Manzano and Tado have also livened up the OK Fine! mix, as long-lost fraternal twins Michael (Aga Muhlach) and Miguel (Bayani Agbayani) have finally formed a family along with their Lola Barbie (Gloria Romero). Now, Michael is the middleman for the get-richquick schemes of his eccentric new neighbor Junior (Edu Manzano). Junior, elder brother of girl-next-door Icay (Rica Peralejo), can be seen operating a car wash, manned by sexy girls, by day while pursuing his interests in jewelry and archaeology on his off hours. Despite his business sense, Kuya Junior always needs Michaels hand whenever he gets into trouble. Meanwhile, ace mechanic Miguel does miracles with the neighborhood cars. Along for the ride are such characters as Lola Barbies maid Camilla (Nikki Valdez) and all-around sidekicks Dong (Onyok Velasco) and Tado..." - Manila Bulletin (READ MORE)

"...While the initial concept was to stir both curiosity and bewilderment among viewers on how on earth funnyman Bayani Agbayani could be the twin brother of drop-dead gorgeous Aga Muhlach, the show has evolved into some sort of weekly witty exchange of comic punchlines and outrageous situations. This, after the creative team behind the show finally found the right chemistry - meaning, the right people for the right roles. With the inclusion of Edu Manzano, undeniably another drop-dead gorgeous actor (although a bit senior in terms of age and experience, but nevertheless gifted with an endearing and highly intellectual kind of outrageous flair), the Aga-Bayani tandem has expanded into a funny triumvirate. Over dinner with Edu, Aga, Bayani and the show's executive producer Cynthia Jordan last week, spirits ran high as each shared anecdotes and stories about the show, specifically the special anniversary episodes they have taped. Some of the brightest stars will make rare appearances on the show for the next four weeks. Vilma Santos, Sharon Cuneta, Roderick Paulate, Regine Velasquez will take turns in doling out laughs with Edu, Aga and Bayani, plus the other mainstays who include Gloria Romero, Rica Peralejo, Nikki Valdez, Onyok Velasco and Tado Jimenez..." - The Philippine Star (READ MORE)