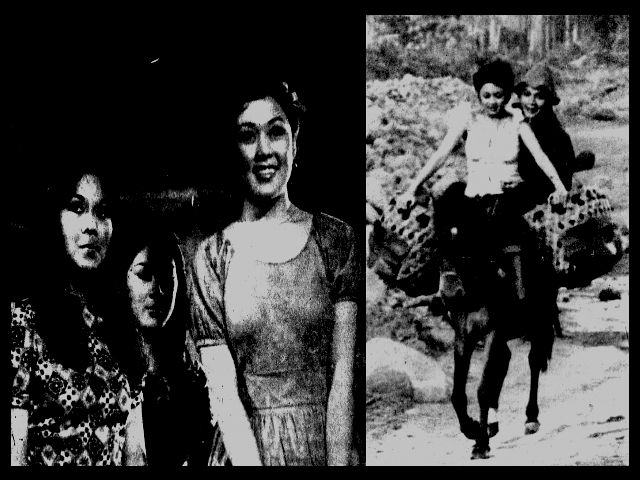 Skeptics disappointed by the clumsiness of craft and the excess of theatrics of Burlesk Queen will have to revise their prejudices against director Celso Ad Castillo. Admirers of the wildly poetic, though erratic and often hysterical, works of the director of Nympha, Ang Alamat, Daluyong at Hagabat have reason to rejoice. Pagputi ng Uwak, Pag-itim ng Tagak, Castillo’s newest film, securely established its director in the ranks of Bernal and Brocka as filmmakers who have something to say and possess the craft and art to say it cinematically. Castillo’s Pagputi ng Uwak is a movie that is truly impressive this year or any other year. The title, Pagputi ng Uwak, Pag-itim ng Tagak is a traditional metaphorical way of saying “Never.” It is the first statement of the tragic theme of this tale about a class-divided (not “star-crossed”) Romeo and Juliet in a small Southern Tagalog town called Santa Ines in the mid 1950s. The screenplay is focused on the young music student Julie Monserrat (Vilma Santos), who has had to grow up without a father, in the care of two domineering old maid aunts (Adul de Leon and Angie Fierro).

As a young woman born in a tradition-bound town but raised in the modernizing atmosphere of Manila, Julie gropes towards maturity without benefit of guidance from understanding elders. Home for the traditional town fiesta, she meets the poor boy next-door, Dido Ventura (played by Bembol Rocco) whose passion and impulsiveness rush her into an elopement But Dido’s family has a long-standing grievance against the Monserrats who, through fraudulence in the past, had grabbed the Ventura property. When the young lovers ask for permission to marry, Julie’s snooty aunts make her choose between her present status as a rich single Monserrat, and an uncertain future as housewife of Dido. In a moment of indecisiveness, Julie gives up Dido and goes back to her music studies. At the university, Julie is visited by the elderly violinist from her hometown whom she idolizes. Maestro Juan Roque (Jonee Gamboa) has learned she is pregnant, and he has come to tell Julie that he is her father and then walks out on him. When she gives birth, against the wishes of her aunts, Julie decides to keep the baby and give the baby to its father. By this time, it has become impossible for the baby to have its father. Dido has joined the band of Huks headed by Kumander Salome (Lito Anzures). Driven by the desire to help his daughter out, Maestro Juan Roque goes to the Huk hide-out to effect a reconciliation between Dido and Julie. A quick night visit for Dido is arranged, and the lovers rediscover each other. Too late, for government agents have learned of the presence of the Huks, and a bloody shoot-out affirms the nihilism of the film’s title.

The screenplay sets the rather conventional plot against a vividly characterized locale and times, using religious festivals to mark the periods of the year and key characters to show feudal society under stress from the challenge of new social forces. It weaves a tragic tapestry around the lovers by juxtaposing social and economic inequity, the pursuit of art, small town police brutality and revolutionary ferment. The result is a reading of the Romeo-and-Juliet story as filtered by a sensibility attuned to the social and historical pressures that mold human relationships in a Philippine town in the 1950s. This is where the writers (Ruben Arthur Nicdao, Lando Perez Jacob and Ishko Lopez) with whom Castillo worked, go beyond other screenplays which had worked on the same plot. The writers have located their characters against a backdrop of social realities which allows the viewer new insights into the ragged twists and turns of a tired plot. Julie and Dido’s fate is made ur concern because the lovers are figures of young Filipinos of the 1950s uprooted from a past they never made and reaching out for a future they are not allowed to make. The lovers are both without a father, and the only fathers in the story are a dedicated musician a staunch revolutionary and a revengeful town mayor, who is the only real family man of the three. This would seem to imply a social comment which is much to veiled to be coherently perceived.

Castillo-watchers who had to cringe at the amount of its acting that Castillo allowed or demanded from his actors and actresses, will be gratified at the quiet intensity of the performances in Pagputi ng Uwak. Although one is never convinced that Vilma Santos can indeed bow music out of violin, her characterization of Julie displays the maturing talent of an actress fast learning to explore and shape her emotional resources in creating a character. Bembol Roco is disadvantaged by the script’s focus on Julie, but he impressively communicates the change in Dido from reckless teenager to hardened rebel. The acting highlights in the film, however, are provided by the three capable stage performers playing supporting roles. At long last Jonee Gamboa has been allowed to shed the irritatingly mannered caricatures he has been made to do in his previous films. As Maestro Juan Roque, he gives a serene portrait of a man who sublimates the turmoil of his inner life into the music he plays and composes in a performance memorable for its restraint and sincerity. Angie Ferro tends to be over-empphatic in places, but her portrayal of Miguela effectively keeps the role from degenerating into a contra vida stereotype by touching it up with humor that is broad yet never out of character. It is Adul de Leon, however, who emerges luminously as a character actress of the first magnitude. Her interpretation of Beatriz is a piece of complex character portraiture all the more admirable for having made a role of rather limited range so persuasively human.

Good performances are not unusual in Filipino movies. What is rare is that coming together of temperaments and skills that make film art possible. In Pagputi ng Uwak, Castillo’s work does not display anything that he has not already shown in his previous films. The fondness for story material that reeks of social overtones, the lyrical exuberance with which he invests starkly realistic situations, and the intensely theatrical confrontations among his characters – these have been qualities evident even in Castillo’s lesser works, where they are often pushed to absurd lengths. What has happened in Pagput ng Uwak is that the director has been able to bring to a focus his varied talents, and found fellow artists with temperaments congenial to his. With cinematographer Romy Vitug and musical director George Canseco, he seem to have found working partners who share his penchant for the poetic, and their collaboration has resulted in a film where narrative imagery and music fuse into a memorable whole. Vitug’s cinematography, always marked by the same lyricism that distinguishes his still photography, adds considerably to the visual impact of Pagputi ng Uwak through lightning and framing that enhance the poetic nuances of Castillo’s direction. In Vitug, perhaps, Castillo has found the ideal cinematographer, one who can effectively translate into visual terms and lush the poetry of Castillo’s imagination. Canseco’s music for Pagputi ng Uwak redeems his execrable work in Isang Gabi sa Iyo, Isang Gabi sa Akin. Inspired by Castillo’s vision and Vitug’s imagery, he seems to have caught fire, and the music (principally, Classical violin music) with which he supports the scenes in Pagputi ng Uwak demonstrates sensitivity to the intentions of the director at the same time that it transports the moviegoers from one image to another, from one point in time to the next, and from poetry to reality or vice-versa. A skeptic turned admirer is perhaps prone to gloss over the flaws of Pagputi ng Uwak. To be sure, cynics will find fault with editing and the production design. Yes, the camera lingers too long at the religious festivals and no, a young woman in the 1950s will not be caught dead wearing a long dress at a fiesta. However, the already considerable amount of art and craftmanship in evidence in Pagputi ng Uwak ought to be ample justification for a more forgiving eye. It is enough that Celso Ad Castillo has demonstrated that he has what it takes to be a major director and most of all, he has come up with a movie that makes film year 1978 begin in July. – Bienvenido Lumbera, "Pagputi Ng Uwak Is Here, Film Year 1978 Has Begun," Who Magazine, July 29, 1978, Posted at: James DR’s Pelikula ATBP, May 11, 2009