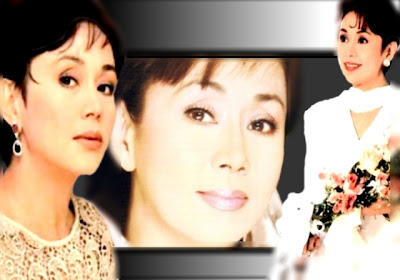 Maria Rosa Vilma Tuazon Santos-Recto (born Maria Rosa Vilma Tuazon Santos November 3, 1953 in Bamban, Tarlac), commonly known as Vilma Santos-Recto or Ate Vi is a Filipino actress and box office queen for almost four decades. One of the original Philippine movie queens, she rose up to become the versatile actress that has been given the fitting title of “Star for All Seasons” because of her capacity to adapt to the changing mores and values of the Filipino woman, giving a face to their plight and struggles, albeit in success both critically and box-office wise in some of Philippine cinema’s classics such as Trudis Liit (1963), Lipad, Darna, Lipad (1973), Burlesk Queen (1977), Relasyon (1982), Sister Stella L. (1984), Alyas Baby Tsina (1984), Pahiram ng Isang Umaga (1989), Dahil Mahal Kita: The Dolzura Cortez Story (1993), Anak (2000) and Dekada ’70 (2002). – Wikipedia (She is currently in politics as the governor of Batangas, Philippines (READ MORE)


Lino Brocka: “…she is very good, she is really big…by the time of Hahamakin Lahat there was the complete sensibility already – a difference in the way she expressed pain and hurt. Talent was welling out like spring water, and flowing from her most naturally.”

Ricardo Lee: “…Vilma, by embodying the different images of the Filipina as victim and fighter in the span of three decades, has consistently molded the image of the woman and society that moves forward…”

Lea Salonga: “Vilma is an actress who can compare with top caliber actresses of Hollywood. She is an epitome of a real queen of Philippine cinema. I really look up to her.”

Charito Solis: “Vilma is a better actress (as compare to her rival)…she has wider range ..a puede kahit anong role(and can do any role)…”

Kris Aquino: “Once you encounter and know ate Vi, you will realized how nice and thoughtful she is. She is always been an inspiration to me. Masarap siyang maging kaibigan.”

Ishmael Bernal: “In Ikaw ay Akin, Vilma was already conscious of her own particular style of acting…which can be described as minimal, less is more. The fewer and simpler gestures, the greater effect…(Working in Pahiram Ng Isang Umage, Bernal said)…she had become an artist, no longer a movie star and just following the director’s instructions...”

Olivia Lamasan: “...With Vilma Santos, kung ano na-imagine ko, plus 10 plus a hundred, she always exceeds it. I’m really in awe of her brilliance, sobra siyang magaling...I was editing [the other day] and there was a scene na drama with John Lloyd (Cruz) and Ate Vi. Pagkatapos kong ma-edit I got so affected that I had to call my mother in the (United) States to tell her I love her and I miss her. So ganun ka-affecting ang performances nila...I want to see her not in a comedy kasi drama pa rin eh pero in a comedic situation. I know for a fact that as a director, hindi ko siya kayang gawing slapstick kasi ako ang number one fan niya. I respect her so much and hindi ko kaya ng ganung comedy for her..."

Mig Macario: "...I've read up on Filipino history...Although I was raised in Canada and grew up in North America, I still have really strong tries to being Filipino...Pinoy ang puso 'ko...Somebody would come from the Philippines and they'd bring in Vilma Santos films, and I just remember, 'Oh, this woman is making me so emotional, I think I'm a Vilmanian. That's what they call it, I think..."

House Deputy Speaker Lorenzo “Erin’’ Tañada: “...We cannot separate those two. Where there is Nora, there should also be Vilma because they grew up practically at the same time. I think both deserve such recognition (National Artist)...If and when a submission is given, then we will certainly take it under consideration...She has a very good and very sterling career in movies and she’s certainly one of the people that we respected in the industry so that would be seriously considered if that were submitted to the proper agency...”

Jon Santos: “She crosses over from politics to showbiz and back. She can say one thing and it can be about motherhood, or love, or stardom, or politics….ang taong for all seasons – award season, holiday season, election season, even back-to-school season. Over time I’ve had the chance to meet her, and nabigyan niya ako ng acting tips. She has validated my work and given me her friendship.”

Xavier Limtuaco (Ateneo student): “Star for all Seasons” sounds so plain…”Queenstar” befits Ate Vi to a T because she has been Box-Office Queen many times and she has been called “Queen Vi” many times as well. Vilma is the only movie queen to have successfully combined commercial and artistic success unlike most movie queens or dramatic actresses who can not have the best of both worlds…Queenstar” is a title Vilma richly deserves in view of her outstanding artistic achievements in local show business…Hail to Vilma Santos, Queenstar!”