Film Review: "...She had the likes of Eddie Mesa, Tony Ferrer and, of course, real-life love Eddie Rodriguez, as leading men on the big screen. With Eddie, two movies stand out in Carmen's memory: "Malayo Man, Malapit Din" and "Simula ng Walang Katapusan" (the latter co-starred Vilma Santos). The way Carmen remembers it, her own love story with Eddie could rival the best silver screen romances. "We first got together when I was 16. It was just puppy love. My mom adored him, but I thought he was boring, stiff and too formal." Two decades after that initial encounter, their paths crossed again. "We starred in a film on the life of Gen. Jose Rancudo. We were both separated [from our spouses] then." That time around, it was a relationship of equals, she says. "We were both successful in our careers and both mature." Eventually, they also separated..." - Bayani San Diego Jr., Philippine Daily Inquirer 10/09/2008 (READ MORE) 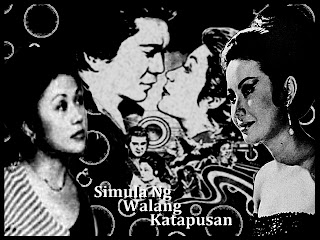 Luis Enriquez aka Eddie Rodriguez first directed a young Vilma Santos in 1968 Kasalanan Kaya, another love triangle genre starring the dramatic trio of Marlene Dauden, Eddie Rodriguez and Lolita Rodriguez. Vilma received an early acting recognitions from this film by receiving a FAMAS Nomination for Best Supporting Actress. When Enriquez directed Vilma again, it was a calculated risk that allowed a still young Vilma into a bikini-clad lead role opposite his director himself, Eddie Rodriguez. The film, Nakakahiya, a may-december affair between an older man and a young woman was an entry to 1975 Bacolod City Film Festival. Aside from making the the film a smash hit, Vilma received the festival’s Best Actress. Enriquez will direct Vilma in five more films, the last one was ExWife in 1981 where surprisingly Luis used in film credits his screen name, Eddie Rodriguez. Theri total number of colloborations were seven (Ex-Wife 1981, Halik sa Kamay Halik sa Paa 1979, Hindi Nakakahiya 1976, Ikaw Lamang 1971, Kasalanan Kaya? 1968, Nakakahiya? 1975, Simula ng Walang Katapusan) - RV (READ MORE)