"I cried but nobody's around..." local girl, Maria

Plot Description: During the Japanese invasion of the Philippines, an assorted group of refugees, including an American soldier, an Army nurse, a priest and a group of local children, try to make their getaway aboard a rattletrap, creaky bus. - The Internet Movie Database web-site 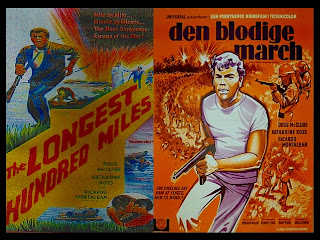 Film Review: The Longest Hundred Miles was among the first feature films produced specifically for television. Doug McClure stars as an American GI, stationed in the Philippines during World War II. Reluctantly, McClure is persuaded by army nurse Katharine Ross and local priest Ricardo Montalban to transport a bus load of native children across enemy lines. Filmed inexpensively on the Universal back lot, the film is distinguished by the musical score of Oscar-winning composer Franz Waxman. The Longest Hundred Miles debuted January 21, 1967. – Hal Erickson, All Movie Guide

"I worked in this film back in 57 while stationed in the Air Force at Clark AFB, PI. I was one of the group of American soldiers on the Bataan Death March, who got into a fight with the Guards so Doug McClure could get away. The film was shot in some parts where the March actually took place. It was a great experience for me to work with Doug who I had seen on T.V. in the states and of course Ricardo even though he wasn't in the segment that I was. I was able to swim and enjoy some great crab with him and it was an honor for he is a grand Actor. I sure wished they would release this on video or DVD. Since I was still in the Philippines when it was shown on television I didn't get to see it. But for that time it was a well made for television movie." - Bill Dunbar (READ MORE)

"...This 1966 film was shot in the Bicol region and starred Doug McClure, Katherine Ross and Ricardo Montalban who portrayed an army corporal, a lady lieutenant and a padre respectively. Included in the cast was the young Vilma Santos..." - Tante de Ramos (READ MORE) 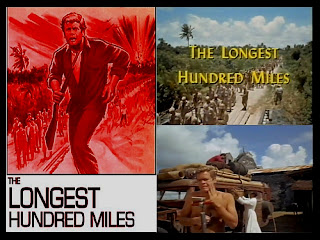 "...This started the showbiz career of Ate Vi. Her most unforgettable film as a child actress is the Hollywood movie, "The Longest Hundred Miles," where she co-starred with international film stars Ricardo Montalban, Katharine Ross and Doug McClure. From 1963 to 1969, she did 27 movies as a child actress. At 14, she got her first FAMAS nomination as a supporting actress in "Kasalanan Kaya?" where she played the daughter of Lolita and Eddie Rodriguez..." - Mario Bautista (READ MORE)