Stage Play - Vilma Santos had a meeting with her Vilmanians the other Friday at Max’s Libis. She reported that she had finally finished shooting her "Maalaala Mo Kaya" episode with Ricky Davao and Maja Salvador, directed by Olive Lamasan. "One year in the making ito, bale two episodes, but it’s really worth it and I’m impressed with the work of Direk Olive," she says. "It’s based on the true story of a woman from Lipa." She said she got an offer to do a stage play at the CCP. She’s willing to try the theatre but when she was told she has to rehearse for two months, she had to turn it down as she still has her duties as Lipa City mayor to attend to. She revealed she has new movie offers, but most of them are heavy drama. She wants to do something lighter that will be more appealing to the masa. Last March 8, Vilma was given the First Diwata Award in celebration of International Women’s Day. That coincided with the 16th International Women’s Film Festival by the UP Film Institute, the longest-running women’s filmfest in the country. She was cited for her roles in films like Sister Stella L, Relasyon, The Dolzura Cortez Story, Bata, Bata, Paano Ka Ginawa? and Dekada ’70, which are about women empowerment. She was honored with Lily Monteverde, Charo Santos-Concio and writer Lualhati Bautista. Vilma was warmly applauded by an adulating crowd and she delivered a very inspirational message, saying: "I strongly believe in these films with strong messages. It’s about time men believe in women empowerment. Don’t underestimate us, women and artists!" Ate Vi left Thursday with husband Sen. Ralph Recto to attend the investiture rites of our new cardinal in Rome (she was personally invited). After that, she will take a cruise with Ralph and meet with her family in Los Angeles. - Mario Bautista, People’s Journal, March 26 2006 (READ MORE)

Flores De Mara - It was last year when we officially heard about "Flores De Mara." It was an event. With the advent of gay-theme movies like Brokeback Mountain and TransAmerica in Hollywood, it would be another milestone project for Vilma and the Vilmanians! Imagine the conservative Filipino church condemning anything about the gay life, it promises a controversial, scandalous film. The plot was Ate Vi will play a mother of not one but three gay sons. Three young actors lined-up, willing to take the risk just to be billed with the Queen of Philippine Cinema. But like the unpredictable Philippine weather, Flores De Mara met its untimely death early this year. Reports of so many script revisions, casting and director changes, plus the restricted availability of Ate Vi were the cause of this Star Cinema’s project being shelved. By February of this year, a new development arised when Lily Monteverde, Regal films big momah, announced she is now doing the project. Same plot (a mother of three gays) tentatively titled, "Manay Po." Cherie Pie Picache fresh from her best supporting actress win for another comedy, "I Will Survive" took the leading role from Ate Vi and Joel Lamangan in the driver seat as the director. It is worth noting that Lamangan ventured in a string of gay induced films in the past. The latest one was "Aishite Imasu," where Dennis Trillo portrayed a transvestite who fell in loved with a rebellious soldier. Aishite was a good attempt to show how people tend to dehumanized the gay people. "Manay Po" is set in today's society where people are more tolerant and accepting. It will be exciting to see if Lamangan will treat these three gay characters as normal, respectable people and not your typical Aids patient or flambouyant caricatures that has been portrayed in many Filipino films in the past. I believe its time for Filipinos to accept and respect our gay brothers and sisters. - RV, V Magazine, No. 7 (READ MORE)

7.3 Million in 1982 - "Gaano kadalas ang Minsan?" grossed 7.3 Million in its few days run in Metro Manila in 1982 outgrossing "Sinasamba Kita" for Philippine movies' all-time box office tally. With inflation and currency rate in consideration that will be around 95 million. But that's not the only exciting thing about these film. It was the only film that Vilma Santos and Hilda Koronel did while atleast when Hilda was still at her peak. Ofcourse, Ate Vi's career remained as hot as ever while Koronel now accepts supporting roles. It was obvious that year that Hilda was also more glamourous than Vilma but looking at the two right now, Vilma maintained that slim, youthful look while Hilda struggled and visibly gained so much weight she can be mistaken as Ate Vi's aunt or mother (Now look slimmer than ever, Hilda staged a comeback via Star Cinema's box office hit, "The Mistress" in 2012!). After Gaano Kadalas, Hilda did a few more leading roles under Viva Films even co-starred with Nora Aunor but didn't get the same results as Gaano. But like what William Leary says, "mahirap matalbugan si Vilma, Vilma is Vilma in any season and whatever movie!" - RV, V Magazine, No 7 (READ MORE) 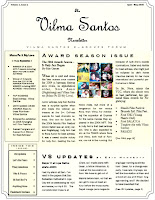 "Hi to all wonderful and good-hearted Vilmanians all over the globe. Welcome to the very first issue of our Newsletter. Yes, our newsletter. This is ours and I'm glad to be a part of it..." - Charlie G 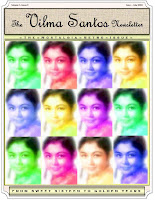 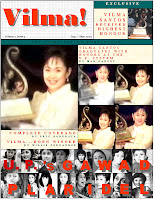 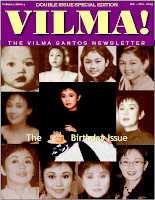 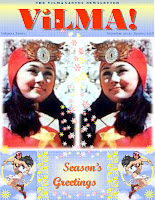 "While talking to Ziyi Zhang (star of Crouching Tiger, Hidden Dragon & Memoirs of A Geisha) recently, I was reminded her of Ate Vi. Vilma Santos is bright, pretty and a good actress like Ziyi." - Ruben N 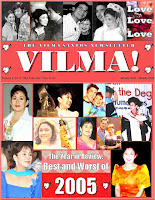 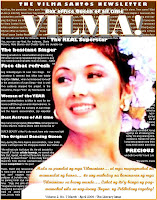 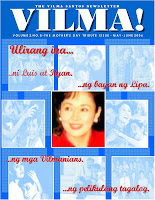 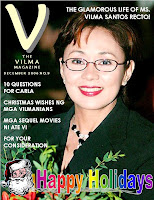 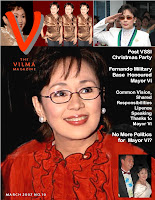 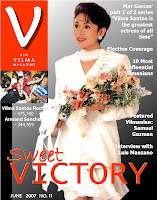 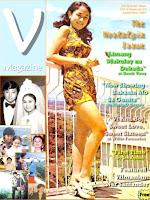 "For us Little Baguio boys, I could only refer to Vilma Santos then as our first legit "barkada" in the film industry, dahil nga sa una naming sine was with her. She was "kalog" and really very smart. I am not surprised that as a mayor, she is able to pull it together." - Roger Rigor of VST & Co

Loyal Vilmanians sent us the latest copy of their official organ, "The Vilma Santos Newsletter," a special one entitled "The Nostalgia-Retro Issue, From Sweet 16 to the Golden Years." This is a must that all Ate Vi fans should have. Published once every two months, the editor is Marcus Peter Lee and the staffers are Eric Nadurata, Mar Garces, Franco Gabriel, Charles Gomez, Allan Trambulo, with Eddie Lozano and Fr. Juancho Gutierrez as contributing writers. It traces Ate Vi's life and career from the 60's to the present, complete with photos from her past houses and movies. There are rarely seen posters of films like "Ging," "Edgar Loves Vilma", "Vilma Veinte Nueve," "Lipad Darna Lipad," "Pakawalan Mo Ako," "Rubia Servios," "Batya't Palo-Palo" (with FPJ), "Burlesk Queen," "Sinasamba Kita," and many more. Fans can also obtain all sorts of trivia and information about their idol. We're amazed at all the details about Ate Vi's career that her fans have gathered through the years, including quotes from our review of her past movies we ourselves don't remember anymore. In their next issue, they promise to feature Ate Vi's winning the Plaridel Award in U.P. There are several Internet e-groups and sites about Ate Vi. The first was "Vilma Santos Star for All Seasons" Yahoo group on July 26, 2000, followed by the VSR e-groups on March 26, 2004, then the Vision e-group founded by Allan Trambulo in April of 2004, and the VSFanClubCanada that is the youngest among them. For the most comprehensive website dedicated to her, visit Eric Nadurata's www.vilmasantos.net that contains her biography, filmography, latest news about her and other tidbits. - Mario Bautista, People's Journal, July 11, 2005 (READ MORE)